Sometimes it seems technology giants seem incapable of learning from their mistakes, which is something we said recently when Samsung was caught tweeting about the Galaxy Note 9 from an iPhone, and now we have another example of the same company repeating mistakes.

This time it’s Samsung using images from a DSLR when trying to show off what a smartphone camera is capable of.

Earlier this year it was noted that Samsung was trying to fool people into believing that the Galaxy A8 had taken a photo that was actually taken using a ‘real’ camera, with the image having been taken from Getty Images.

Now a similar thing has happened again, with a photographer finding that their work was being used to promote the Galaxy A8 on Samsung’s Malaysian website. The photographer, Dunja Djudjic, posted to her blog pointing out the situation.

The photographer had shared her original photos, taken with a DSLR, to EyeEm and they were later made available to Getty. Djudjic then did a reverse image search on the photos, ending that they were available on Samsung’s website with the Korean company claiming that they were taken on one of its phones. Something that is clearly not the case. 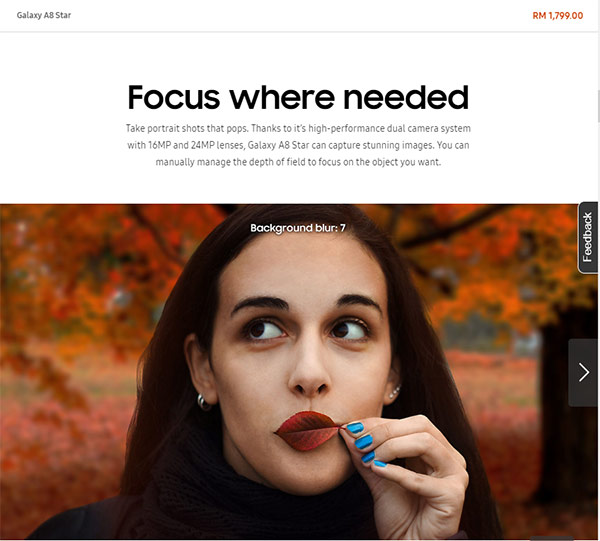 Samsung had used two versions of the image to show how its phone is capable of portrait mode bokeh, with a different background having been added to the original image that was shot by Djudjic. Samsung’s disclaimers don’t quite make it clear that the images aren’t legit, saying that “The contents within the screen are simulated images and are for demonstration purposes only.” That refers to the onscreen graphics rather than the images themselves, which obviously doesn’t quite cut the mustard here.

That disclaimer has since been changed to “The contents within the screen and images are simulated for illustrative purposes only.”