It’s becoming increasingly clear that brands, nor their ambassadors, are going to learn that if you want to promote a smartphone, the very least you can do is send the proportional tweet from the phone in question.

It’s not exactly the kind of thing you need to be top of the class in marketing school to understand, yet nobody seems to be able to wrap their heads around it. The latest to fall foul of something that should be glaringly obvious to anyone, is none other than Samsung.

Samsung Mobile Nigeria, to be precise. In a tweet this past weekend in which it promoted the Galaxy Note 9’s “stunning cinematic” SuperAMOLED screen, YouTuber, Marques Brownlee noticed that the tweet had been sent from, you guessed it, an iPhone.

Putting aside the fact that we’re not sure the Note 9 has the best screen around for just a minute, how difficult can it be for Samsung Mobile Nigeria to get its hands on a Samsung phone to send a tweet about Samsung phones from?

Once the tweet was spotted and roundly ridiculed, rather than simply deleting the tweet someone decided the only recourse was to delete the account as a whole. Samsung Mobile NG no longer exists, which seems a bit over the top to us, but we’re not in charge of social media for one of the biggest phone makers on the planet, so what do we know? 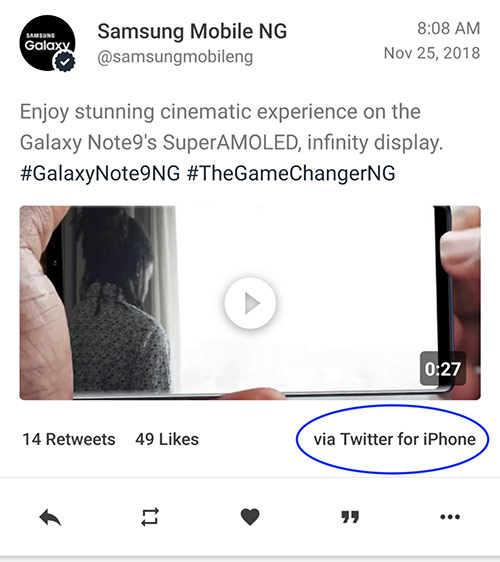 Well, apart from knowing that you can’t tweet about a Samsung flagship from its biggest competitor, of course.