If you’ve seen one of Samsung’s ads over the last year or so then you’ll probably already know that the Korean firm has not been too shy about poking fun at Apple. In fact, Samsung has even seen Apple’s customers as fair game when putting its ads together, making fun of the people who line up outside an Apple store for a new iPhone, for example.

With the Galaxy S III’s arrival in the United States, and perhaps with one eye on the ongoing legal battles between the two, Samsung has decided to move away from the Apple bashing it is so fond of, instead deciding to promote its new phone based on its features rather than the fact it isn’t an iPhone. 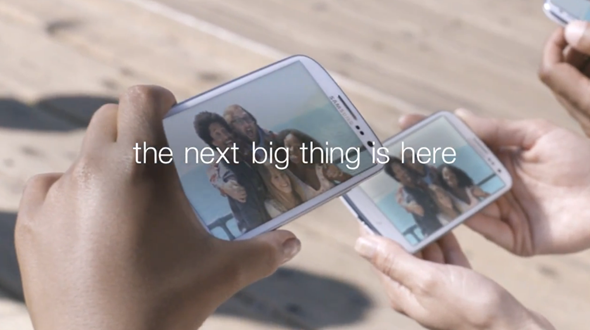 Three new ads are now airing for the Galaxy S III in the United States, with all three being variations on a similar theme. Samsung has decided to push the new phone’s ability to share files with other people easily, removing the need for dongles, cables and any other random wire that may be needed with other smartphones.

The first ad shows a group of people asking a passer-by to take a photo of them. The ad continues as each member of the group asks for the same photo to be taken on their own phone so that they have a copy. The ad finishes with a Galaxy S III owner taking a photo and then wirelessly sharing it with their Galaxy S III owning friends. No iPhone in sight.

The remaining two ads follow a similar trend, with a baby being born in one and the photos being shared across a range of Galaxy S III devices instead of just one handset being passed around a group of people. It’s a real-world example that may not crop up too often, but you get the idea.

Samsung has been criticized in the past for its making Apple a target in its ads, especially stooping to the level of aiming jibes at iPhone users. The new ads are much more conventional, with the device in question being shown off rather than a competitor being made fun of.

It helps that the Galaxy S III is an awesome phone, too!