Google released Android Jelly Bean, or at least announced it, at Google I/O recently. Since then, Android enthusiasts the world over have been clamoring to get their hands on the latest version of the mobile operating system to come out of the search giant’s Googleplex campus. If you’re the owner of a Galaxy Nexus then you’re one short flash away from having the Jelly Bean experience installed on your very own device. If not though, you face a wait of indeterminable time.

Luckily though, since the Android 4.1 announcement various parts of the OS have been leaked out for use on devices still running older versions. Before today you could already install the new Google Play store on your device, and now you can add the Jelly Bean version of Google Music to the list of leaked apps.

As is so often the case, we have an XDA-Developers forum member to thank for the latest Jelly Bean related fun, with forum-goer Steveooo7 making the required files available for download to anyone who wants them and happens to be using an Ice Cream Sandwich-equipped device. It may not be the full Jelly Bean experience we are all so eager to get our hands on, but hey, it’s at least a little taster, right? 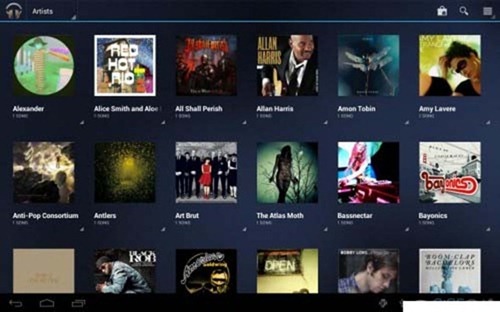 So what do you get from this illegitimate update? In all honesty, not all that much to be honest. There are a few visual changes that won’t make a huge difference to the way you use the app, and the Google Music widget has seen a bit of a refresh.

In order to take advantage of the Google Music app that comes with Android 4.1, Jelly Bean, you’ll need a device running Android’s Ice Cream Sandwich flavor and also have that device rooted. Chances are that if you’re this eager to try out a new version of Google Music, then you’re also the kind of person who likes to have their devices rooted, but it’s worth a mention regardless.

For those keeping track, this particular version of Google Music is version number 4.3.605. We know some of you like to keep an eye on such things!