Christmas is barely a recent memory, but that hasn’t stopped the rumor mill kicking into overdrive this January, and the unannounced Samsung Galaxy S IV is high on the list of devices that we are all talking about.

With the Galaxy S III possibly the most popular Android phone ever, it is understandable that the Android community is eagerly awaiting whatever Samsung has up its sleeve this year. After all, how do you best a device that caused many an iPhone user to switch to Google’s ecosystem? Well, one improvement may well be wireless charging.

According to at least one Korean blog, Samsung is set to bring wireless charging to its Galaxy S lineup for the first time. Rather than build the technology required right into the phone itself as Nokia has, Samsung is likely to take a similar approach to that of Palm, back in the days of the Pre. For those with short memories, that means we can expected to see a charging mat of some sort being sold separately to the phone itself, with a replacement rear Galaxy S IV panel bundled alongside it.

Interestingly, Samsung was apparently considering taking an altogether different route by plumping for the more advanced resonant magnetic coupling method of wireless charging. This is what Apple has been looking at already, and has been claiming patents on. According to SamMobile however, the costs involved were prohibitive for Samsung this time around. That’s a real shame, as resonant magnetic coupling does not require the phone to be in contact with the charging station in order for power to be transferred. If Samsung wants to rid itself of the ‘plastic toy’ stigma it harshly possesses, such a technology would certainly go a long way. 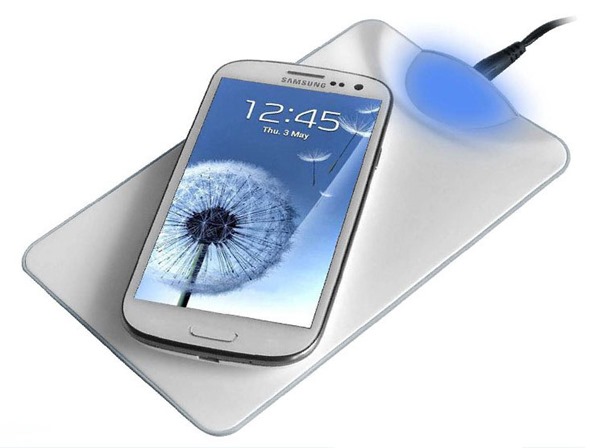 There has been no official word from Samsung regarding the next generation Galaxy S handset, but it’s a fairly safe bet that one is already in the works, with a release later this year almost guaranteed. We’ll just have to wait and see whether wireless charging is something that the handset can boast come announcement day.