As we keenly await the announcement of the Samsung Galaxy S5 later on this month, new reports out of the company’s native Korea have implied that as well as the imminent flagship, Samsung plans on releasing a handset with a wraparound display later on this year. Although the TouchWiz maker likes to keep the flow of handsets constant throughout every year, only two – the Galaxy S and Galaxy Note – tend to stand out among the also-rans. However, the prospect of a first Samsung smartphone packing this unorthodox display would certainly grab the headlines, and if it is in line for a launch at some point in 2014, would likely upstage both of the current flagship ranges.

Samsung has never been afraid to buck market trends, and has already released a device featuring a curved display in the form of the Galaxy Round. Purporting better viewing angles when watching video and using apps, it’s fair to say that the Galaxy Round – like similarly-rounded devices from other vendors – has yet to really take off, but the idea of a wraparound display has us even more excited.

As demonstrated by the concept images, the flexible OLED display would wrap around each side of the device. The additional real-estate along the edges of the handset would would potentially offer extra space for notifications or touch-based controls, and having first been showcased at last year’s CES, The Korea Herald believes that Samsung will bring the new technology to the mainstream.

The report suggests that the device will hit the market in "late 2014," but gives no specific details beyond that. Considering that the S5 will probably drop earlier in the year than its predecessor did last year, Samsung could also bring the launch of the Note 4 forward to July/August time, which would, in theory, leave the fall / holiday release bracket for this mysterious new entry. 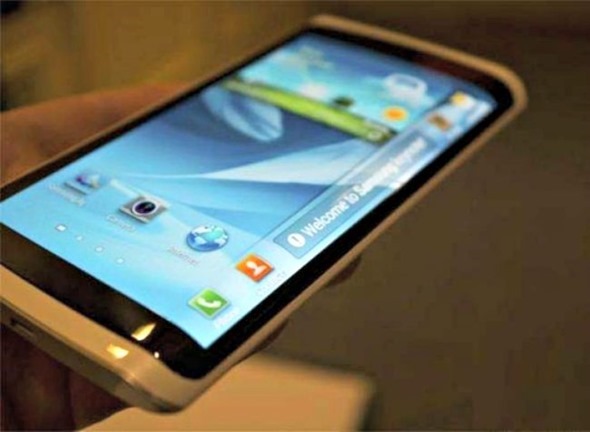 Then again, The Korea Herald goes on to say that Samsung will likely only manufacture a small number of units, using the first device of its kind as something of a guinea pig to test the waters without throwing too much capital into the idea.

Still, we’ll be eagerly awaiting more news, and even though we can’t wait for the grand unveiling of the Galaxy S5 at the start of MWC on Feb. 24th, this report already has us hyped for what might be around the corner.