Rooting has almost always been a necessary concept with Android devices, and if you’ve ever used one while being interested in unleashing the full potential of your smartphone or tablet, you would have rooted it at some point. There are many benefits to gain out of gaining superuser (root) access on an Android device, the biggest of them being able to run custom ROMs – homebaked firmware that unlocks those areas of your device that the manufacturer deemed potentially dangerous to play around with. One thing that all rooting techniques, in general, have in common, is the fact that they all require the use of a computer. Whether you’re flashing a rooted kernel on a Samsung device using Odin, or firing up a command prompt to key-in the commands yourself, or even using a one-click method like CF-root, you will always find that you need a computer to accomplish that. Well, not anymore, now that Root Transmission is here.

Root Transmission is an APK – android application package – that will install and configure on any rooted Android device that supports USB On the Go (OTG) host. You can then root a target Android phone that sports the same protocol using a USB OTG cable. The application basically provides a terminal emulator on your rooted host device that can run the ADB-based root commands on the target, resulting in superuser access for the latter. 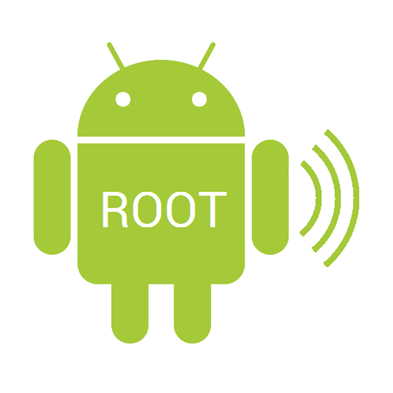 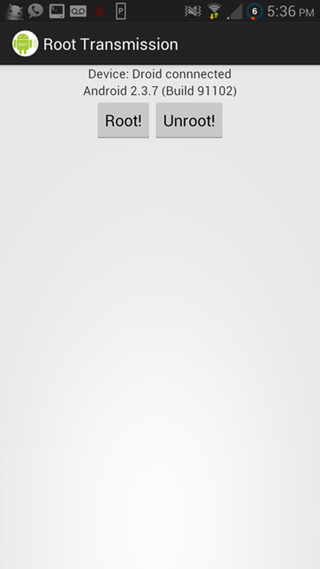 What does it need?

An application like Root Transmission has a series of limitations, although it’s a huge leap forward in the right direction for rooting Android devices on the go. In a nutshell, what you’ll need is

How does it work?

If you have all the above components, then it’s just a matter of placing the root script in the host device’s internal memory/SD card, inside the Root Transmission folder, and hitting the Root! button on host. The terminal emulator on host will display all the commands that are being executed, so you know exactly what’s going on. It’s that simple! 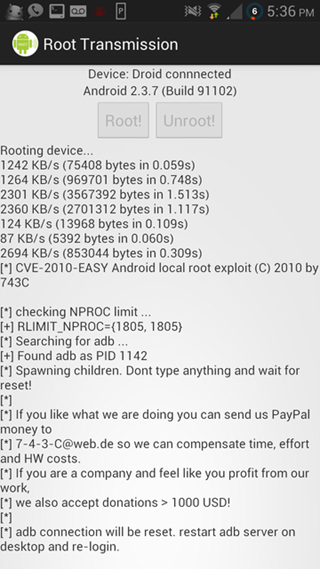 What devices are supported?

That’s hard to say definitively, but for a general principle, if a device has a root method that relies on ADB, it will work. Just push the root script to the above-mentioned location on the host, and let the app do its magic. The developer had tested it only on Samsung Galaxy S III, and it worked.

There’re quite a few, actually. For one, it’s hard to get both devices with USB OTG support. Then, for another, you need a target device for which an ADB-based root exists, which won’t be the case for a lot of Androids out there. Still another, Root Transmission itself is stable, and comes without any warranties or guidelines, which means that if something screws up, you’re pretty much on your own.

For a concept, Root Transmission is a great app, and one that we hope to get much more polished down the road. The application is available at XDA-Developers forum, and can be downloaded and found more information for at the source link below.