Looks like we can add Robin Williams to the list of people who are in love with Siri. Apple has included the assistant in every iPhone 4S. With reports of Siri being somewhat cruel (just kidding) to some, it’s nice to see the application in a lighthearted way. 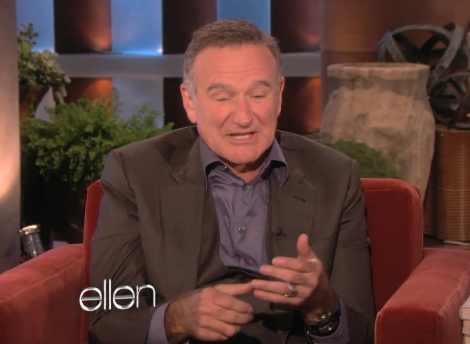 The comedian made an appearance on Ellen to promote his upcoming movie Happy Feet 2. During the casual chitchat, Williams talked about his experience with the iPhone assistant while in France. For those of you at work or are unable to hear the audio in the video here’s a quick recap:

Ellen admits that while she knows and is interested with the Siri phenomenon she isn’t all that familiar with it. She asks Williams if Siri is an app for the iPhone in which he responds that it is the app for the iPhone. He quickly cuts into a role-playing back and forth conversation he has had with the Apple assistant while in France.

At this point the audience laughs as he acts out what he imagines possible answers Siri should have responded with (in a French accent no less):

“You’re in France! Walk outside.”

“Walk down a block!”

“Look around, you idiot!”

“Why must you ask your phone?”

“Taking pictures with your Phone? Look, then paint!”

His love for the iPhone is no secret. In an interview with Associated Press he admitted:

Williams: I’m fascinated by the new iPhone. I bought it and kept trying to use it in France. “Siri, what is a good restaurant?” (In a robotic voice.) “I’m sorry, Robin. I can’t give locations in France.” ”Why, Siri?” ”I don’t know.” It’s like she was upset with the French or something. “They seem to have an attitude I can’t understand. Should I look for Germans, Robin?”

Robin Williams’s fans should definitely take a look at the short Ellen clip; it showcases the actor’s amazing versatility.  He has proven his talent by winning an Academy Award for his performance in Good Will Hunting and an additional two Emmy awards, two Screen Actors Guild Awards, four Golden Globes and five Grammy Awards.

Williams reprises his role as plays Lovelace in Happy Feet 2. The film premiered in North American theaters on November 18, 2011.