Replace Facebook Reactions Emoji With Emoji Of Your Choice, Here’s How

Facebook’s Reactions is a feature that had been rumored for a while and finally arrived last week, allowing users of the social network to react to any particular status update with emoji beyond the Like button. They’re a little bit of fun, and certainly harmless enough, but they’re a bit drab, because like so many emoji, Facebook Reactions are essentially little yellow faces. Wouldn’t it be cool if they were something a little more interesting? 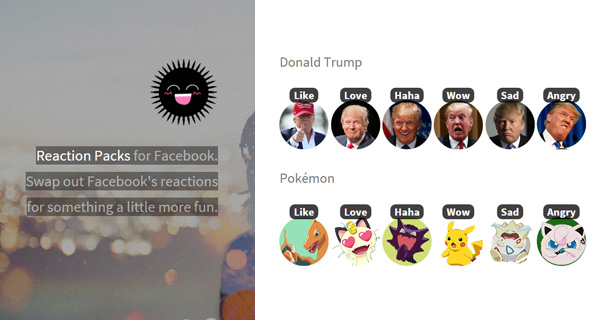 The browser extension in question is called, predictably, Reaction Packs and once installed, visiting the Facebook web page will yield a whole new flavor of Reactions emoji for your delectation and importantly, they don’t need to have Donald Trump anywhere near them if you don’t want them to!

Of course, the extension will only replace the emoji for you, that is, it acts like a skin for Facebook’s new Reactions, one that won’t be visible to other Facebook users unless they have it installed as well.

Right now, Reaction Packs doesn’t actually have all that many packs to choose from, with only five available at the moment. One of them does include the aforementioned Tump faces while another is indeed a variety of Pokemon, so in those two alone, we’re sure any sane person will be able to find something to suit them. Hopefully, if the extension does well, its creators will add more packs and more emoji in time.

Now, we’re off to react to posts about Donald Trump by using his face to show how bemused we are.