Facebook Reactions Now Live On iOS, Android And Web, Here’s How To Use It

Facebook is continually looking at ways to expand the social experience, and in turn, make the overall Facebook experience more pleasurable and contextual for those who regularly use the platform. After initially confirming that it was planning on introducing a new “Reactions” feature back in October, and spending more than a year developing how that would look and work, the world’s largest social network is now in the process of rolling out the new Reactions experience to accounts across the world.

Facebook account holders have been able to react to a connections status update, photograph upload, or a post of any other type with a “Like”, which is something that the network has become known for. With that said, Facebook ‘Likes’ may have solved an issue when they were originally introduced, but users have been crying out for a way to react with something other than pure positivity for quite some time now. The work behind the scenes to bring the new Reactions feature into the public domain is Facebook’s proposed solution to those pain points. 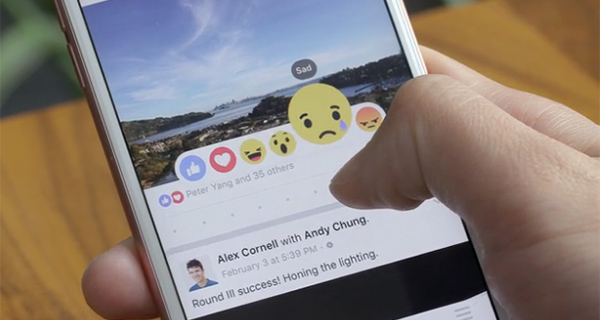 The Facebook Like button will still be prominent throughout the network, but it will now be infused with a long-press gesture capability that brings up a number of new ways to react to a particular status update from a connection. The result of that long press will be a set of new “Love”, “Haha”, “Wow”, “Sad”, and “Angry” Reactions that can be used to express a particular sentiment, rather than simply liking every post, regardless of the content of that update. Each update will also show the number and type of Reactions received to date. Those accessing Facebook via a desktop will be able to hover the mouse pointer over the Like button, which will reveal the multiple new Reactions for selection.

Step 1: To begin, launch the Facebook app on your phone or tablet, and head to a post on the News Feed or a friend’s Timeline.

Step 2: Tap and hold on the Like button, which should reveal a popup menu containing the new Reactions emoji will appear

Step 3: Without lifting your finger, drag your finger right or left and you will see the emojis being highlighted. To post a Reaction, simply highlight the emoji of your choice and lift the finger. Voila! You have posted your first Reaction on Facebook.

Step 2: Using the mouse, hover the mouse pointer over the Like button, and a popup menu containing the new Reactions emoji will appear.

Step 3: To post a Reaction, simply click on the one of your choice. Yup, it’s that simple.

Tom Alison, who currently operates as Director of Engineering for the News Feed aspect of Facebook, knew last year that something needed to change based on internal experiences, and the pain points experienced by those using Facebook daily:

Everyone’s had one of these posts in News Feed where they’re like, I want to respond in some way, but ‘like’ doesn’t feel appropriate at all.

Alison also commented that it was extremely important for the engineering teams behind the feature to come up with a solution that was truly universal and that could be rolled out and used in the same way across multiple territories. The company’s initial testing showed that users in differing countries interacted with the new Reactions in a similar fashion. The iconic Like button within Facebook has long needed an overhaul, and Facebook has now finally acted on that.