The iPhone Dev Team has released yet another update to Redsn0w 0.9.7 jailbreak tool. This new version fixes all sandbox-related issues, including Bluetooth problems on an untethered iOS 4.2.1 jailbreak. Also added is an “anti-piracy plea” note as a warning for those of you who are pirating iOS 4.2 beta 3 firmware. 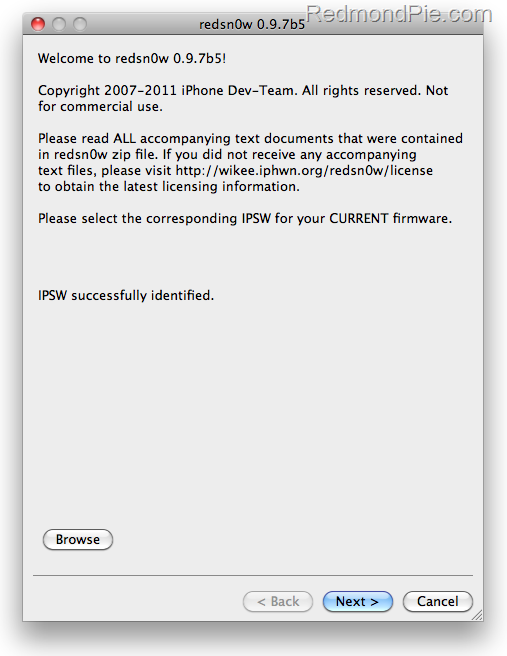 The Windows version of Redsn0w 0.9.7b5 is also ready, well almost, the only problem is that it is currently painfully slow to use, so the iPhone Dev-Team has decided not to release it until they can fix the performance issues.

There is actually a Windows version of beta5, but it’s excruciatingly slow compared to the Mac version because it’s forced to use files on your hard drive instead of RAM while it’s processing the very large IPSW images.  It really is very very painfully slow, so we probably won’t be releasing it for testing purposes unless it can be sped up somehow.

You can follow our instructions for untethered jailbreak (skip Step 4 of usbmuxd as it is no longer needed) by following our complete step by step guide posted here (video below) to jailbreak (untethered) iPhone 4, iPad and iPod touch 4G on iOS 4.2.1 with Redsn0w 0.9.7.