The last couple of days has been rammed full of Apple related goodness with more than enough news coming out of Cupertino to keep the most hardcore Apple fan content. The release of the financial figures for the third quarter of 2012 showed great progress with seriously impressive sales of the iPad and a profit of $8.8 billion raked in during the period. And today, we saw the final retail version of OS X Mountain Lion hitting the Mac App Store, and is all set to consumed by millions of Mac users out there.

As users all over the world head on over to the Mac App Store to make their purchase and install OS X 10.8 onto their Macs, the question of software compatibility will ultimately be in the back of their minds. For those among us who are active and frequent members of the jailbreak community, you will clearly be aware that any update to Apple’s iOS software can generally lead to tweaks and Cydia packages becoming unusable due to internal changes made by Apple. Updating a desktop operating system obviously doesn’t have an impact on Cydia tweaks, but it does have the potential to impact the way jailbreak tools work.

One of the most popular jailbreak tool is Redsn0w which is provided by MuscleNerd and his fellow iPhone Dev Team members. Thankfully, he has moved to eradicate some of the fear by telling his Twitter followers and updating the iPhone Dev Team blog to inform users that Redsn0w is compatible with Mountain Lion:

Redsn0w is compatible with today’s retail release of Mountain Lion OS X 10.8.  Until we start using an official developer ID for it (!), you’ll need to use the new Ctrl-Click-Open security bypass the first time you run it after downloading.

As per the blog post instructions, those who intend on using 0.9.14b2 version of Redsn0w on OS X 10.8 will need to Ctrl-Click-Open the app for the first time to bypass the new security features in Mountain Lion. This is only applicable on the first run after the download. The fact that Mountain Lion has only been officially live to the public during the course of today and having seen a jailbreak related update already shows that the iPhone Dev Team is on the ball as always and is continuously looking out for the best interests of their community. 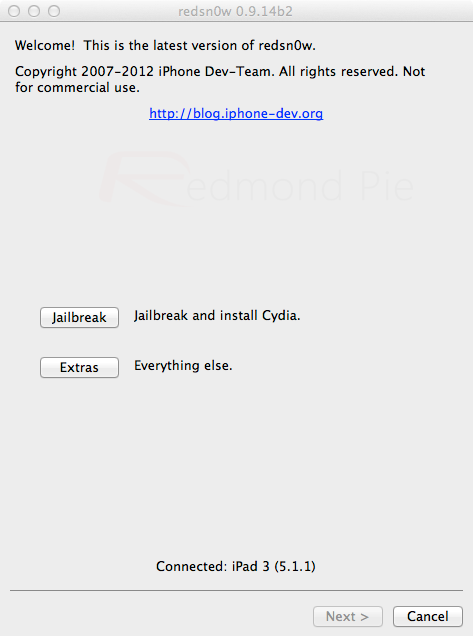 Redsn0w can be used to jailbreak iOS 5.1.1 and below untethered on all devices except for 3rd-gen Apple TV.