It never ceases to amaze us the kind of things developers can get up to when they have a jailbroken iPhone to play with. Granted there are the plethora of themes and notification replacements but every so often we get something that breaks the mold. Something comes along that reminds us of just how talented the iOS development community really is.

One such app was something we told you about a while ago called 3DBoard. What 3DBoard did was use head-tracking technology to change the orientation of an iDevice’s homescreen, giving the illusion of 3D. It worked a treat and we all marveled at its ingenuity. Now Apocolipse, 3DBoard’s developer is back with a new app – and it’ll blow your mind. 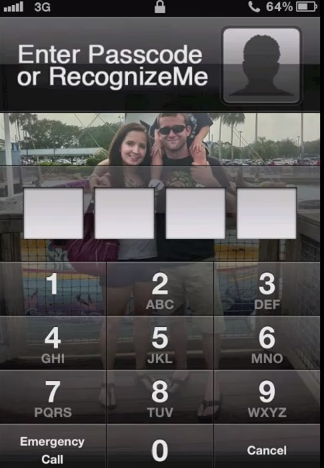 This new app, again for jailbroken devices only, is called RecognizeMe.

What Apocolipse has done is to harness the power of the iPhone’s front-facing camera in order to bring the first real face recognition device unlocking tweak to Apple’s hardware.

RecognizeMe adds a new button to your unlock screen that prompts the software to check the person standing in front of it matches a pre-defined database. If it does, access is granted. If it doesn’t, users are thrown back to the device unlock screen and prompted to enter their PIN. No worries about being wrongly locked out of your phone here.

RecognizeMe has its own YouTube video showing off just what it can do, and it’s impressive stuff indeed and is just another example of what developers are capable of when they have a jailbroken iPhone to hack around with.

RecognizeMe will be available in Cydia in the next 24 hours and will be priced at $6.99 for the next 3 weeks, so grab it while it’s cheap!

UPDATE: RecognizeMe is now available on Cydia under BigBoss repository!