In May of last year we brought you some news about a truly fantastic piece of development work by a developer known as Chris Simpson, also known as Apocolipse if we are to give him his online moniker. We covered the initial release of a tweak known as RecognizeMe which used the front facing camera on a jailbroken iOS device to provide an extra layer of security before access could be granted to the passcode protected gadget.

It has been almost twelve months since the initial release, and this week has seen the release of version 2.0 of the ground breaking RecognizeMe software which caused such a storm last year. First of all, I’m pretty confident in saying that nothing else exists like this for any iDevice and although the Ice Cream Sandwich Android OS does have a face detection system built in, iOS has nothing of the sort and doesn’t look like it will have for quite some time. Simpson has taken the bull by the horns and added more grunt to this already impressive software which is sure to make RecognizeMe 2.0 a very sought after tweak.

The first first iteration of this modification was the first ever facial recognition and biometric security implementation for an iOS device. By adding an additional button the devices lock screen, RecognizeMe was able to let the user choose to undergo a facial scan to pass a security check rather than input a four digit passcode. When prompted, the front facing camera on the device scanned the person it found before it and attempted to match the facial characteristics against its database of matches meaning that if a match was found, access to the device is granted.As you might expect with a first release of such a complicated and in depth tweak, the success rate of detection was not as high as it could have been and sometimes resulted in a failed verification. 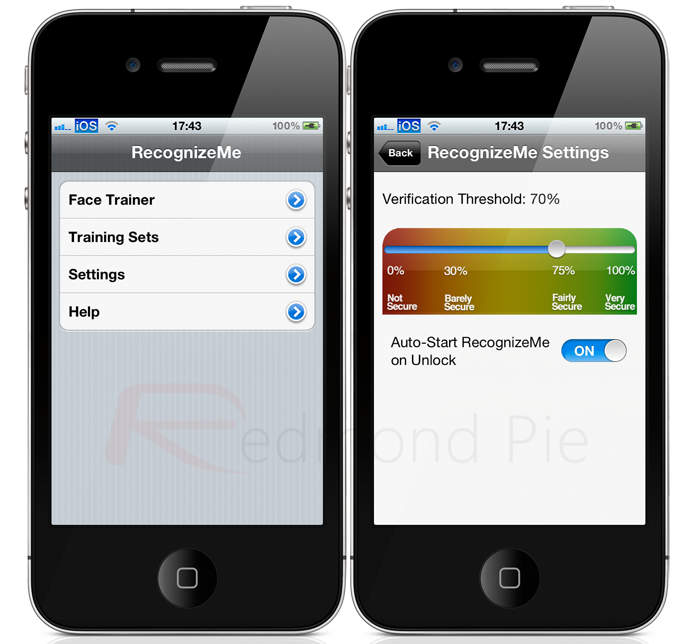 With RecognizeMe 2.0, the developer has attempted to alleviate that problem by substantially improving the tweak. It is available for all devices which feature a front facing camera and is compatible with iOS 5. The default option of accessing the device via a passcode is still available, or as an alternative you can choose to use your own beautiful face as a biometric passcode if you can stand looking at yourself every time you unlock your device. RecognizeMe 2.0 adds an extra icon to your SpringBoard which features a facial recognition training system to let your device get to know your facial features so it can provide the best match possible when it comes to crunch time. You can even view the training log and see snapshots that the device has taken of your face during the training exercise which gives you a better understanding of how the tweak actually works.

So just what has been improved or added in the latest version of RecognizeMe? A number of developers just seem to make a few UI adjustments and call it a whole new application, or make a big deal out of it. That is certainly not the case in this instance with version 2.0 offering quite a substantial change log:

From the list of changes, it seems as if Apocolipse has gone back to the drawing board and decided to rewrite a large portion of his code to offers his users drastic speed improvements and an overall improved user experience. I have been using the RecognizeMe 2.0 update for two days now and can honestly say that apart from two instances where it took a little longer to detect me than I’d like, I have had total success with it.

RecognizeMe 2.0 is a commercial package and is available in Cydia now on the Big Boss repository at a cost of $2.99.