The Consumer Electronics Show is an annual event that takes place in Las Vegas and always, without fail, throws up at least one new product or prototype that has tongues wagging and minds racing. With the 2017 event still ongoing, we think we just found out what prototype wins the award for “best idea ever, but never going to ship” this time around. That prototype is Razer’s Project Valerie, a gaming notebook that doesn’t just have the one 17-inch screen, but three.

You read that right. 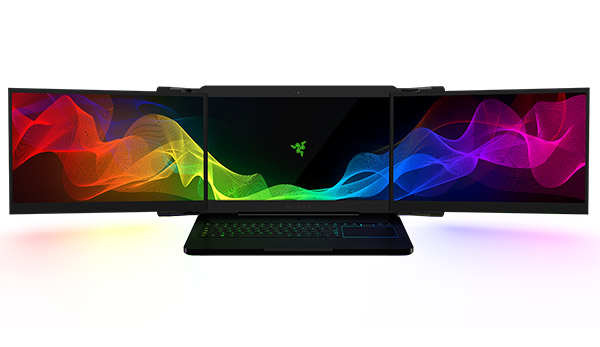 With three 17.3-inch screens and powered by an nVidia GeForce 1080 GPU, gamers would see a resolution of 11520×2160 from the machine’s three 4K displays. Razer says all three displays can be used independently should you need to get any work done, but the real fun comes when they are working as one, displaying your favorite game in a way we’re willing to bet you have never seen before.

As if a notebook computer with three 4K screens wasn’t impressive enough, Razer automated the deployment system so the two additional displays automatically extend from the main display when required. This makes the process quick and easy, whilst also ensuring perfect alignment when all three screens are deployed. That system also means the notebook is no larger than a traditional 17-inch notebook when packed away, making it perfectly portable. Or at least, it’s as portable as any 17-inch notebook can be, weighing in at 12 pounds.

It’s important to remember that Project Valerie is exactly that, a project, and Razer did not announce a release date or price for the machine. We don’t expect to see it imminently, if at all, but just knowing that a company out there is even considering something like this is enough for us, really. Well played, Razer.