We are fast approaching the business end of Apple’s sixth-generation iPhone release schedule, and if sources and intuition proves to be serving us correctly, then we should be getting our first official glimpse of the new piece of Apple hardware on September 12th. Apple is yet to officially come out and confirm that the event is happening, but a number of indicators seem to have given the game away with the extremely familiar Moscone Center in San Francisco looking likely to be the chosen venue.

Until that event happens, we still have a few weeks to dig around and try and find out as much as we can about what Apple is planning in the run up to the holiday season. Over the last few months we have already seen a plethora of leaked images and photographs of individual components which we are led to believe are actual official manufacturing parts from the next-gen device, but the reality of the situation is that there is likely to be more of these types of rumors emerging in the next three to four weeks.

As part of those leaks, we have seen what we believe to be the outer shell and rear casing for the unit, as well as seeing some internal sensors and the new internal cabling layout that provides the necessary power to the device’s volume buttons. More recently, we have been treated to a relatively mysterious thin protective metal casing that could form part of a protective barrier for the new larger display, and also saw the new battery pack which Apple is hoping will pack the talk time into the new iPhone. Not wanting to be the ones who spoil the party, we are also now aware of some images that could possibly be the internals and outer housing for the new smaller dock connector that we believe the device will feature. 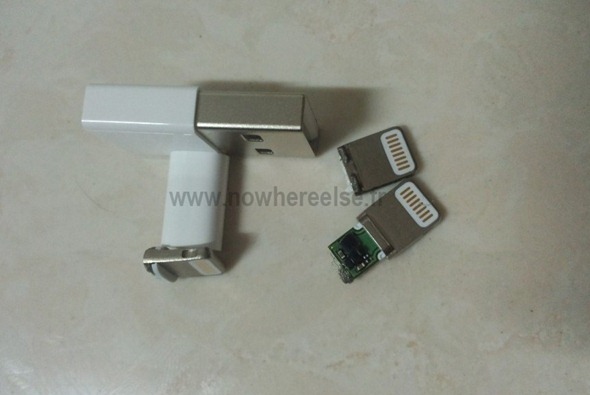 Coming courtesy of NowhereElse.fr, the component in the images is stacked up against the USB end of an existing iOS synchronization cable to give a little insight to the actual size of the new connector. Although we are entirely confident that the new iPhone will come with a smaller connector, we have heard varying reports about the size ,with some outlets claiming it could be either 8, 9 or 19-pin. Even Apple’s own internal iOS 6 logs contain references to 9-pin devices. That could still happen, but the images in question seem to show the connector with eight visible pins meaning that the guessing game will more than likely continue right until the last minute. 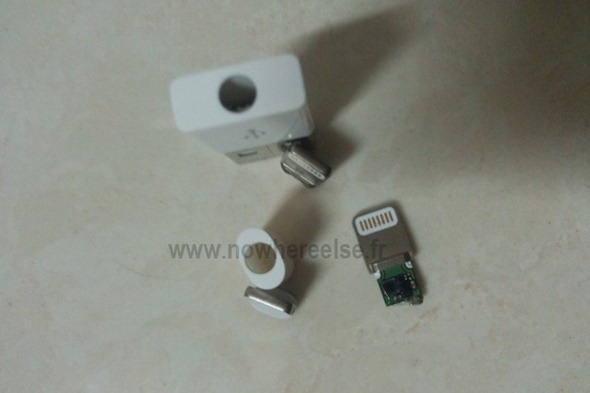