Black Galaxy S III Could Be A Strong Possibility, According To Carphone Warhouse’s Internal System

The Samsung Galaxy S III was one of the most highly-anticipated Android releases of this year, but after numerous purported sightings and inaccurate images of the device’s final design, it was of much surprise that the device didn’t ship in black. Sure, many vendors alter and omit various colors along the way, but the black shading of the device had been a standard feature of both the original Galaxy S and its predecessor, the immensely-popular Galaxy S II.

There were plenty of murmurs that the black device was not released so as to throw Apple off the lawsuit scent. After all, the Cupertino company has launched a string of patent infringement claims against its main rival, and it was thought the S III was essentially designed by lawyers. Sure, Apple doesn’t own the color black, yet by offering devices dissimilar in color to Apple’s largest-selling and most prevalent device (i.e. the black iPhone), perhaps Samsung thought Apple may be less likely to drag it through the courts once more.

Indeed, the reason for the lack of a black version could be an entirely innocent one, and although the rumor mill has been in full flow ever since the smartphone was first announced back in June, an image snapped on the database of Carphone Warehouse (a UK-based smartphone retailer) suggests the black Galaxy S III could soon be a reality.

Rumors will indeed be rumors, but snaps like this certainly add a little backbone to what otherwise is mere speculation. Personally, I think the S III suffers without a black device, because the red, white and "pebble blue" models look like an alternative color, as opposed to the bar-setting standard. Furthermore, although this is not the case for all smartphones on the market, I reckon the S III will look a great deal better in black, despite myself owning a white Android and iOS device. 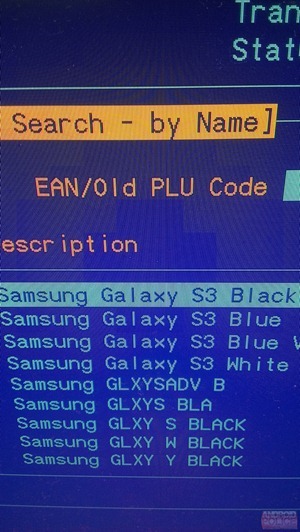 It wouldn’t make me purchase one, but I am sure there are many out there who would now seriously consider the Galaxy S III in black.

Are you one of those folk? Please do share with us your thoughts by dropping a comment via the usual mediums below, we’d love to hear from you!