A new PlayStation 4 Pro model carrying an entirely new model number and SKU has quietly sneaked its way into stores. In fact, if you have purchased a PlayStation Pro very recently, then you may even be the proud owner of this new model which didn’t get any official introduction.

The new Pro hardware carries model number CUH-7200 and has managed to slip into the public domain without any introduction by Sony.

And, in all honesty, this is perfectly reasonable considering the hardware doesn’t carry any real user-facing changes and looks as though it has been introduced to try and reduced the sound output that gets generated due to the console’s processing power and capabilities. Many Pro owners had previously complained of the noise levels from the relatively new Pro model and this seems to be Sony’s attempt to at least reducing that issue.

The measured output on this new PS4 Pro model has seemingly been reduced from a top-end 50 decibels down to just 44 decibels with this latest version. This may not seem like a huge improvement but it’s definitely enough to prevent the console from sounding like it’s about to take off whilst you’re enjoying a game of Red Dead Redemption II.

However, it is being said that Sony may have achieved this quieter output by sacrificing some level of thermal protection on the new model console, which means that you may discover it runs slightly hotter than older PlayStation 4 Pro hardware. It should still be safe and shouldn’t be a problem whatsoever. 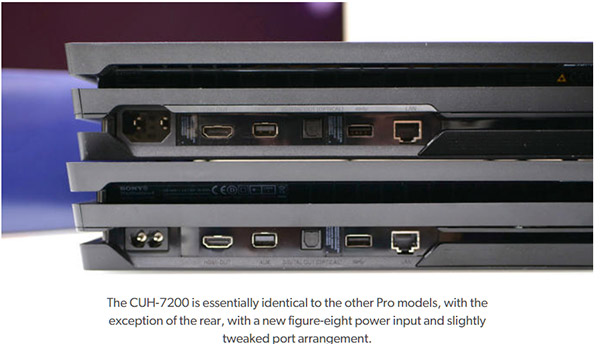 There are no functionality or performance improvements with this new SKU – other than the aforementioned noise improvements, of course. If you were to look at this model and an older PS4 Pro side-by-side then both models would look identical, save for the fact that Sony has moved the new hardware across to a figure-of-eight power adapter arrangement on the rear of the console. Other than that amend, it’s business as usual for the PlayStation 4 Pro.

For anyone who owns a PlayStation 4 Pro, there is really no reason to rush out and purchase this model. That is, unless your current model really bugs you with its noise levels. However, if you’re about to buy one then it’s definitely worthwhile trying to get this model to make sure that you get the console with the reduced sound output.

Check out the complete review in the video below: