President Obama To Hangout in Google+, Find Out How You Can Be A Part Of It

It was only last week that Google announced that its social network, Google+, had breached the 90 millions users mark which represented quite a staggering rise in registrations considering that number was closer to the 40 million mark in October last year. We all know however, that a registered consumer base is somewhat different to an engaged consumer based but in the Google+ world; Larry Page reckons that sixty percent of those users use the site daily, with approximately eighty percent being active weekly users. 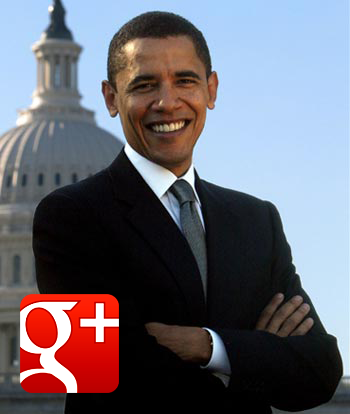 At the beginning of November last year, Google started rolling out the ability for companies and celebrities to open up their own dedicated Google+ page. With The White House taking advantage of this, in an attempt to offer a more publicly engaged government to the American citizens. The opening of a Google+ page comes on the back of The White House which also has a Facebook, Twitter and LinkedIn accounts which they believe shows that they are committed to public engagement and participation.

As you might expect, The White House Google+ page contains official blog posts, which are also featured on the website, along with photographs, videos and any official announcements which may be made, which gives followers the chance to comment on the posts and share them amongst their followers should they wish. One of the powerful features of Google+ are the Hangouts and Huddles which allow groups of people to come together in one place to have a voice and video conversation. It seems as if The White House is about to use the power of Google+ Hangouts directly after the President’s State of the Union speech to answer questions the American public may have, and take on board any ideas about rebuilding the nation.

The Google+ Hangout is set to be the first entirely virtual interview held by a President, with hopes that it brings about some transparency and encourages mass public participation. To go alongside the social hangout, President Barack Obama and his team will also be responding to questions relating to his State of the Union speech as well as addressing any pressing issues which the public may feel should be known about. The Hangout will take place on January 30th from inside The West Wing of The White House and will feature him personally answering specifically chosen questions which have been submitted via YouTube.

If you plan on submitting a question to President Obama, I would probably wait until the State of the Union speech, you never know, you could be one of the lucky ones who is chosen to actually feature in the Hangout and make history by asking the first question in the first ever completely virtual presidential speech.