Pokemon Go Ditto now available in the game, its approximate location has also been found. Niantic has made some server-side changes to Nearby feature as well. Here are the details.

Pokémon Go has now been available on a worldwide basis for iOS and Android for approximately six months, and it’s been nothing short a rollercoaster ride for Niantic Labs. Maiden features that shipped with the original version of the game have been removed as part of the developer’s commitment to excellence, with multiple features also added as part of the update process.

The Nearby feature, which essentially alerts the Trainer when a Pokémon or PokéStop is near, was originally being trailed in the San Francisco Bay area of California, but is now in the process of rolling out to additional locations.

With this rollout, Pokémon Trainers can utilize and interact with the new feature in all states west of the Mississippi River, with the exception of Hawaii and Alaska. Canadian trainers in British Columbia, Alberta, Saskatchewan, Manitoba, and the western half of Ontario can all interact with the feature as well. Similarly, all states and territories in Australia are also included in the expansion.

In response to constant feedback, Niantic has also tweaked the feature a bit, where the feature now only shows up when a PokéStop is nearby. Of course the developer has also expressed that it is still taking feedback about the feature, and will continue to progress and enhance how the Nearby functionality works as time progresses. 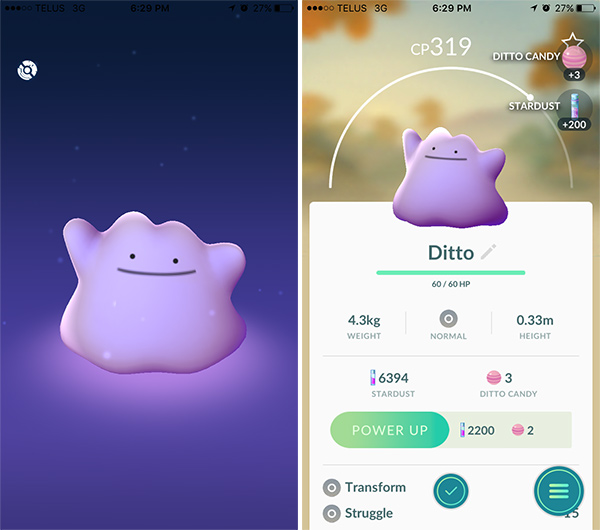 Stepping away from that particular feature, it’s also being reported with excitement around the web that “Ditto” has also started making an appearance in the game. In fact, you may have already caught the beautiful pink blob without actually knowing it.

Rather than simply traversing the local area and seeing Ditto sitting there elegantly waiting to be caught, he is actually disguised as other Pokémon through the game. That means that you may be catching a Rattata or a Pidgey, but right before your very eyes you will see that boring catch transform into a beautiful Ditto ready to be added to the Pokédex.

If tips floating around are anything to go by, then it looks as though Ditto is found more often in some of the low-level, more frequently found Pokémon, so make sure you catch all of those Pidgies and Fearows.