It’s always nice to get something for free in life, and while Xbox 360 users had to pony up a subscription free for the privilege of using Xbox LIVE, those on the PS3 enjoyed the PlayStation Network’s online multiplayer infrastructure free of charge. But while Sony has since switched things up with the PlayStation 4’s paid, PS Plus service, one savvy user has found a little loophole that effectively lets you use it for free, extending the 14-day PS Plus trial by a seemingly infinite length of time.

Of course, since the console will be a collector’s item by the year 2035, which is how long the anonymous tipster has pushed the end-date of his free trial back until, this little hack essentially offers free PS Plus for life, and although it does require a little time and persistence, it seems pretty easy to replicate.

All one has to do to capitalize on the loophole is open up the PS Store, hit the PlayStation Plus tab, and locate the banner offering a 14-day free trial. Then, after adding credit card details (you won’t be charged), a new window pops up with info on extending the membership; and therein lies the glitch, which allows the 14-day trial to be added a seemingly infinite number of times.

The guy who discovered the hack stopped at the year 2033 initially, but when he checked back the next day to see if it still worked, decided to bump the trial up a couple more years, securing PS Plus until the year 2035. 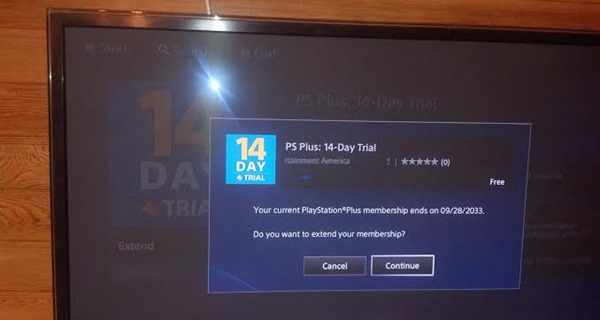 Considering how much the gaming world has evolved over the last quarter of a century, it would seem unlikely that we’ll even be playing video games in the same manner in 21 years’ time as we do today, let alone through the PlayStation Plus Network. But in any case, should the PS4 outlast the original PSX, PS2 and PS3 combined, then our friend will be able to continue slaying noobs for no subscription fee. 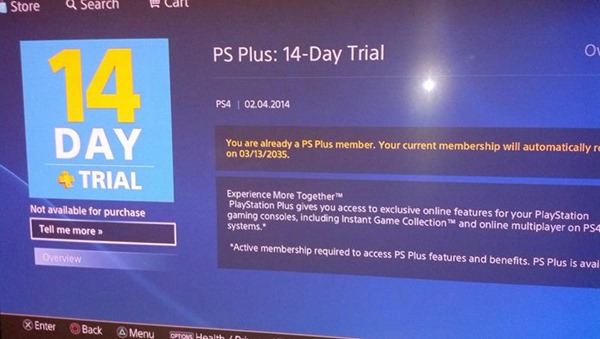 So, as long as you’ve the patience to keep sitting there pressing the "X" button, then you too could theoretically top your free trial up by 14 days each time, with the total cost arriving at $0.00.

The individual behind the discovery states that it only works with new signups, so you will need to sign up for a new account if you wish to take advantage, and since you get a new email confirmation for each trial added on, you’ll have to deal with quite a bit of spam.