Ever wish the PlayStation 3 had a smaller form factor and a built-in monitor? This "portable" console is a water-cooled PlayStation 3 retrofitted into a custom-made laptop case. 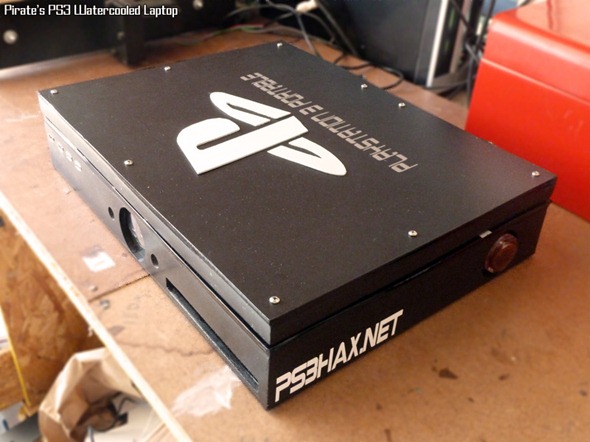 The product starts with an unmodified 40 GB PlayStation 3, since there was no slim version when the project was started, and crams it into a 13-inch-long, 16.5-inch-wide, 2.5-inch-thick custom-made case, made out of sintra/komatex plastic with an aluminum bottom plate. The case also has a built-in keyboard and speakers with volume controls, 4 USB ports, a 2.5mm headphone jack and a slot-loading Blu-ray drive. As for screen real estate, there’s a 720p HD screen built right in.

The insides have also been upgraded quite a bit. The final product has a 500GB hard drive and is fully water-cooled. The new cooling system won’t only provide a quieter experience while playing games, it allowed to remove the heat sinks that took way too much space, as explained by the mod’s author:

The reason for water-cooling the system was to redesign the cooling to fit in a small case (which is significantly thinner than previous portable I made). Water-cooling the PS3 allowed me to get rid of the clunky heat sinks which was responsible for cooling stock PS3s. Only 4x40mm fans were used in cooling the entire system.

It’s important to note that although this modded PlayStation 3 has a laptop form factor, it doesn’t have a built-in battery: it needs to be plugged into the wall in order to function. Either way, I doubt anyone would want to carry around a 15-pound laptop. 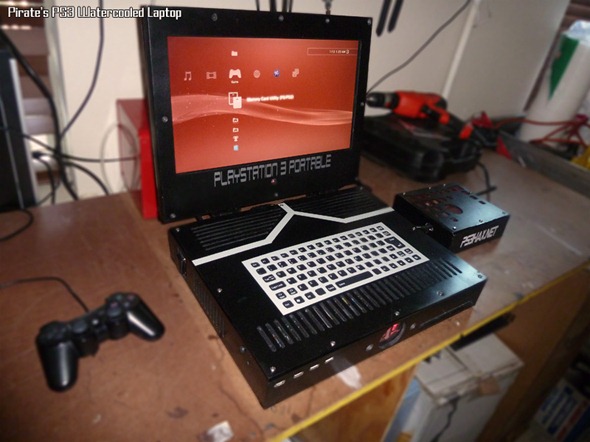 The project is currently up for auction on eBay, with 12 bids, the highest of which being $1.000. The modder also claimed he’d allow potential purchasers to bypass the bidding process by contacting him on the site’s forums. A fraction of the money raised will go to earthquake relief efforts for the tornado in Joplin, Missouri, while the remaining funds will go to maintaining the modder’s website. It is shipping worldwide.

While it might not actually function as a laptop, due to its lack of battery, this form factor does save some valuable space, since it doesn’t require an external display. This can make playing your latest PS3 games on your desk a rather effortless task. The next step would be to dual boot it with an actual desktop operating system, that would turn this into a dream single-purpose machine for gamers.