Living in a world where our smartphones are the center of our lives may not be too far away, but being able to place it on a table and have it start doing all kinds of magical things wasn’t on our list of wants for that utopian future. At least, it wasn’t until Pizza Hut got in on the act.

With help from Chaotic Moon Studios, Pizza Hut has taken the humble restaurant tablet and turned it into something that is so much more. In fact, it’s probably the kind of thing that would have us going to Pizza Hut instead of any other eating establishment, which is kind of the point really. 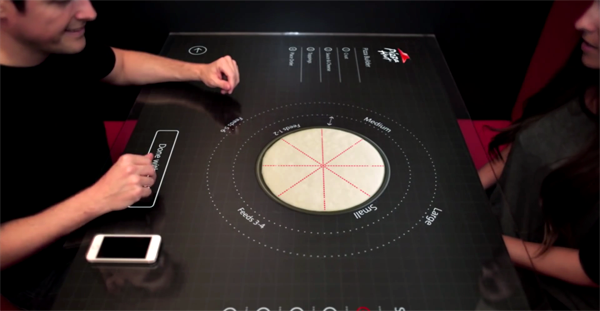 As shown off in its promotional video, the Pizza Hut touch-screen-enabled table concept would allow anyone with an iPhone to sit down and have their identity recognized. That would potentially mean that payment methods, favorite items from the menu and other details could be instantly relayed to the restaurant, as well as any allergies that would mean certain foods wouldn’t be suitable. When it comes to Pizza Hut though, the table’s ability to give customers a way to interactively design a pizza would no doubt prove hugely popular, again giving Pizza Hut an edge over its competitors.

Of course, all of this is currently a pie-in-the-sky kind of thing, but the fact that an establishment like Pizza Hut is working on making it a reality should bode well for the future. Without a doubt this concept bears a resemblance to Microsoft’s own Surface table, something which never really took off properly, until Microsoft shrunk it down a few feet and turned it into a tablet. If this alternative was able to hook straight into whatever phone is placed atop it though, the possibilities would be almost limitless.

We’re unashamedly excited about where technology could take us in the next twenty years, and tables such as this one shown in concept form by Pizza Hut are hopefully just the beginning. Sit back and watch the promo video and we’re sure you’ll agree. We need this kind of thing in our lives, sooner rather than later!

Do you think such technology should be offered by every outlet like Pizza Hut as standard? The obvious answer is yes, but still, we want to hear it directly from our readers.