In an effort to amp up an already bustling niche that Apple has managed to carve for itself in the wearables market with the Apple Watch, the Cupertino-based giant has been found to have developed an official charging dock specifically for its “most personal device ever”.

The Apple Watch has been out for quite some time now, but to this date has not been officially complimented with a charging dock of its own like the latest iPhone Lightning Dock for the iPhone 5, 5c, 5s, 6 and 6s. However, a set of photos that has leaked onto the web today seems to suggest that all this is about to change.

Called as the “Magnetic Charging Dock” for the Apple Watch, the leaked retail packaging features an outline of a circular disc printed on the top of an otherwise clean white box. The instructions on the back shows a disc like dock that can charge the Apple Watch in two orientations, laid flat on it, or on its side – with support for Nightstand mode in watchOS 2.

Importantly, the package also includes a USB to Lightning cable (2m) to help you connect the dock to a power source. A USB power wall adapter though does not appear to be included in the package. 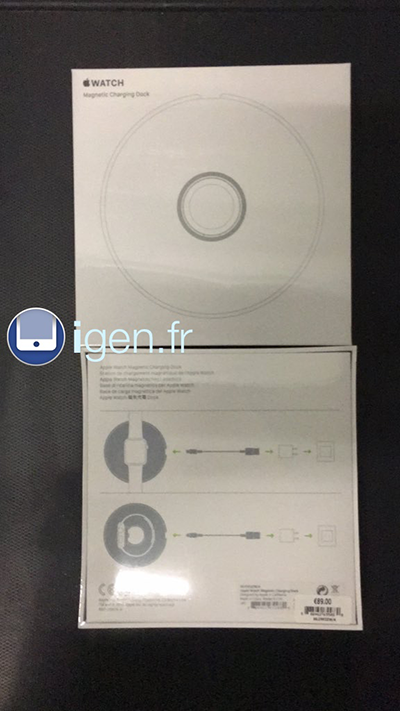 The dock shown in the leaked photos is white in color, and while we would love to see Apple offer more colors for different Watch models, we cannot confirm if that would be the case at this point in time. 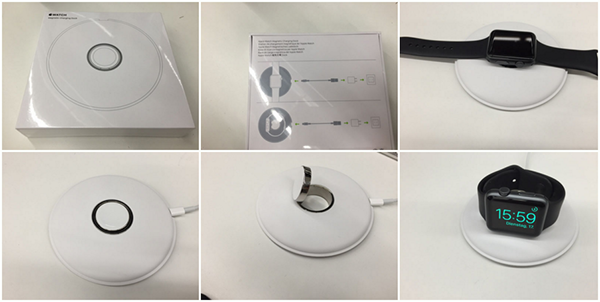 The dock’s listed price on the box reads €89 in Europe which will approximately be around $79 in the United States. It is considerably more expensive than the $39 Lightning Dock that Apple offers for the iPhone but this hardly comes as a surprise given the complexity of the Magnetic Charging Dock’s design compared to the iPhone dock, also the fact that it includes Lightning cable in the package, unlike the Lightning Dock.

So when will this official dock for Apple Watch hit the digital and physical shelves of Apple Stores worldwide? There is no word on that for now, but we’ll bet it’s coming really soon. We’ll keep you updated as more information rolls in.