Chinese microblogging website Sina Weibo has yet again provided us with a glimpse at a potential iPhone 7 component purportedly direct from Apple’s supply chain. Production of Apple’s upcoming iPhone is reportedly being ramped up ahead of a late-September public reveal, but we are now seeing yet another parts leak in the form of a Rose Gold iPhone 7 rear casing that potentially provides us with a glimpse of what to expect from the camera module in the new iPhone, as well as a quick glimpse at Apple’s replacement of the antenna lines that have previously broken up the flawless design of previous iPhone models.

The first thing to notice here is that this alleged rear casing for Apple’s upcoming iPhone 7 doesn’t immediately introduce any cutting-edge changes that we weren’t already aware of thanks to previous leaks and speculation.

The component itself instantly looks and feels like an iPhone shell, with the same form factor and size as the existing iPhone 6s models, and carrying the sound rounded corners that consumers are used to. There’s no Apple logo or product specific text on the shell, but it’s likely that that is the last printing to be done during the process.

The leaked case shows the cutouts for the camera, microphone and camera flash in a familiar location in the top-left corner of the shell. Nothing instantly looks strange about the microphone or lens apertures, but the cutout for the camera module does seem to suggest that the new iPhone will ship with a single-lens camera. At least the smaller iPhone 7 will. The majority of analysts and historical speculation that we’ve seen to date suggests that the larger iPhone 7 Plus/Pro model will try and entice consumers into a purchase with an upgraded dual-lens camera system that utilizes hardware and software improvements for a better quality photography experience. 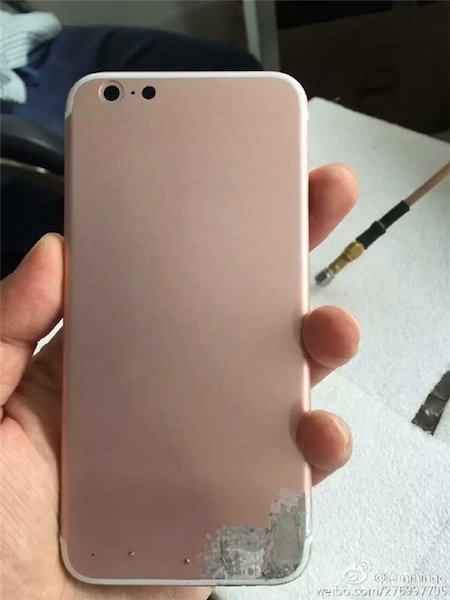 If accurate, this latest leaked component also clearly shows that Apple has taken the opportunity to provide users with a single, unbroken design on the rear of the device by moving the existing antenna lines to the top and bottom of the casing. They are still visible and noticeable, partly due to the fact that they are a different color to the rest of the shell, but they will no longer interrupt the visual flow of the device when looking at it from the rear. It’s highly likely that we will see a lot more of these component leaks coming out of the woodwork as we get closer to the official September reveal.