If today’s events at the Mobile Security Conference (MOSEC) in Shanghai are an indication of anything to come, then it looks as though it could once again be a good time to invest your interest in the world of jailbreaking.

Hardcore jailbreak fans have long been starved of a public-facing jailbreak solution for the latest versions of Apple’s mobile platform, but it looks as though Pangu, the Chinese jailbreak team behind the recent Pangu 9 jailbreak for early version of iOS 9, may have some positive news in the pipeline after today’s MOSEC on-stage demo.

The one-day MOSEC security conference is an annual event where researchers and all persons and companies with an interest in mobile security come together to share knowledge and watch demonstrations and workshops. This year’s event is being co-hosted by Pangu, meaning that the formidable team of popular hackers and researchers were aways going to play a prominent role in how the day unfolded. For maximum dramatic effect, Pangu showed off a working version of Cydia running on a jailbroken iOS device running the first iOS 10 pre-release beta.

The demonstration clearly shows that an iOS 10 jailbreak is in the works, it also indicates that the team responsible for most of the recent publicly available jailbreak solutions clearly have the necessary vulnerabilities and exploits needed to liberate the iOS 10 ecosystem.

Whether or not all components are already in place to actually provide a full iOS 10 jailbreak solution to public at this point is another guess. 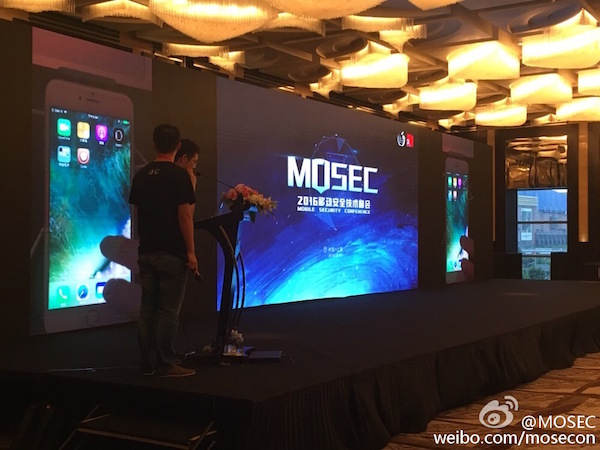 For those that are currently sitting on iOS 9.3.2, which is the latest consumer-facing version of iOS, there may be some good news coming soon as well. According to a number of tweets from audience members who were present at MOSEC, when faced with questions, the Pangu team alluded to plans to release an iOS 9.3.2 jailbreak soon. There was also a tweet posted publicly by a member of the POC team which co-hosted the event alongside Pangu, referencing a security issue that was demoed on iOS 9.3.2.

Of course, as we should all be aware by now, referencing a particular firmware version or showing off an exploit doesn’t necessarily equate to a public jailbreak release in all instances. However, it’s undeniably good news for the jailbreak community that Pangu is still actively working on liberating iOS, be it for iOS 10 or iOS 9.3.2/9.3.3 firmwares.