Jailbreaking is alive and kicking thanks to the behind the scenes work of the Pangu team, which has now announced via Twitter that version 0.4 of its Pangu 8.0-8.1.x Untether package will be available shortly.

It’s been almost two weeks since the Pangu team put the blindside on us all by announcing that it was releasing a fully functional untethered jailbreak for devices running iOS 8 / 8.1. It was definitely a welcome announcement for those who are still heavily involved in modifying and extending the functionality of their iOS devices, but nevertheless it was something that not a lot of us seen coming. In the time that has followed, we’ve welcomed a number of critical updates to fix reported bugs and stability issues, with the latest version of the untether rectifying an issue that caused significant overheating on 32-bit devices. 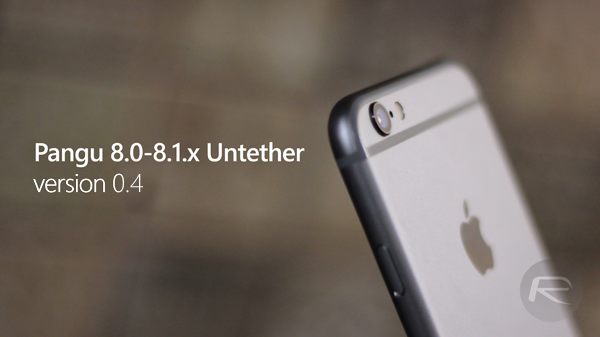 The soon-to-be-released version 0.4 will continue on that trend by fixing an issue that some users have reported when interacting with content via Mobile Safari. The reported issue doesn’t seem to be affecting all devices that have been jailbroken using the latest Pangu untether, but exists in a large enough percentage to warrant pushing out a dedicated version to rectify the issue that seems to occur predominantly when streaming video based media through Apple’s Safari browser. There’s no official word yet on the entire changelog for the Pangu8 untether 0.4 as yet, meaning it’s highly possible that a number of other niggling issues will also be fixed when this release lands.

The Pangu8 untether package 0.4 will be available via Cydia for users that are jailbroken using the Pangu tool itself. For those wishing to jailbreak directly from a Mac OS X machine, it seems that the wait will be extended a little longer with no confirmation, or denial for that matter, regarding a Mac compatible tool.

Whenever the new and updated untether package lands, we’ll notify our readers, so stay tuned to our coverage.