OS X Mountain Lion 10.8.1 To Be Seeded To Mac Devs And AppleSeed Users In The Next Few Days

OS X Mountain Lion has been with us for long enough, and users can form their own opinions on Apple’s latest cutting edge operating system and certainly decide themselves if they feel it is an improvement over OS X Lion, or even the latest version of Snow Leopard if they refrained from upgrading to Lion. Judging by the fact that Mountain Lion notched up over three million downloads in twenty four hours and the Mac App Store is littered with positive reviews, it would seem that the majority have greeted OS X 10.8 with positivity.

Although Apple’s latest software for the Mac boasts two hundred features over its predecessor, it seems that the initial public release has caused a few issues for users who have installed it on either a MacBook Air or a MacBook Pro. One of the most important parts of any notebook computer is the battery life that it gives its owner, but unfortunately there has been a large number of reports suggesting that their Macs have been suffering from excessive battery drainage immediately after Mountain Lion was installed. Rather unfortunately for me, I am one of those users who installed OS X 10.8 on a late 2011 MacBook Pro only to find that my battery life has seriously degraded.

Thankfully, all hope is not lost and it would seem that Apple is planning on pushing out an update that would take the operating system to version 10.8.1, hopefully addressing a number of issues that have been reported back to Apple from keen-eyed users. Members of the AppleSeed program – a system that allows general members of the public to test out pre-release software in real world circumstances in order to find and report issues – have begun to receive notification that the OS X 10.8.1 beta is available. The next stage in the release schedule would be to push out the incremental update to registered members of the Mac developer program to allow them to run it through their paces before letting it loose on the average Mac user. 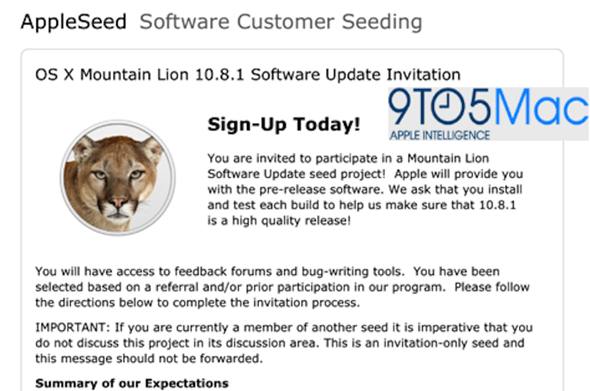 At this stage, it remains unclear exactly what the official changes are in the first Mountain Lion update, but I imagine that improving the battery life on MacBooks have certainly been a priority for Apple and the OS X development team. Considering Apple has actually listened to users in this instance and have actively sought usage information from those who have been affected by the decreased battery life, it seems that the issue will be addressed. We will bring you more information when the official update lands to the general public.