I used to be a big fan of professional wrestling back in the day. I used to spare fours hours a week, every week (no matter if I was having final exams) for SmackDown and RAW.

That was until I realized how stupid the idea of men fighting each other in front of a large audience was. Why not fight elsewhere? Why create a fuss in front of the public?

I still kept watching, though, because it was so gosh darn fun to see two muscly men beat the living life out of each other.

But then, I was informed that even the fights were fake. Yes, professional wrestling is completely scripted. From who gets punched first, who jumps from the top of the cage, who wins and when, it’s all decided well before the match even gets discussed in front of the public. I hate to break it to you this way, kid, but it’s the truth!

So, that was it for me. But there are millions of people out there who, despite knowing that Undertaker’s record of being undefeated at WrestleMania is scripted and decided by writers, enjoy the sport / spectacle because, as I said before, it’s fun to watch two grown men fight the hell out of each other. 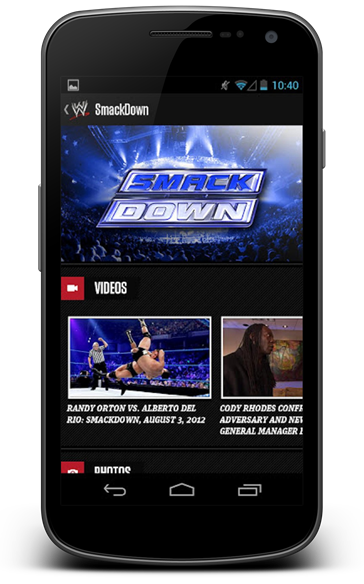 For those WWE fans who own an iPhone, iPad or an Android smartphone, I have good news: the company has released an official app for both platforms and it is pretty powerful.

With the WWE app, you  can get the latest breaking news from world of WWE, browse through the humungous library of latest and legendary videos and watch them on your iOS device or use AirPlay with Apple TV to see them on the big screen, enjoy photos and unspecified “exclusive content” through the app. You can also look at your favorite wrestlers’ profiles which show their history / milestones, recent videos and photos etc.

Additionally, the app can act as a second screen companion for when you watch Monday Night Raw (SmackDown isn’t mentioned). You can discuss the proceedings of each show with other fans of WWE using the built-in community features and even meet up with them at WWE matches near you for which complete details are given inside the app.

It really is the ultimate WWE app for smartphones and tablets. You can download it for free from the links embedded below.