Download And Install Android 4.0.4 ICS With Sense 3.6 On Desire HD Via Unofficial ROM

Android manufacturers aren’t the very best when it comes to supporting their smartphones after the initial point of sale. You get the occasional bug fixes, performance improvements and such, but upgrades to major new versions of Android come way too infrequently and very late. This is in contrast to Apple’s strong support for their devices: the iPhone 3GS is almost more than 3 years old now and is still slated to get iOS 6 later this year.

Among dozens of other devices, the HTC Desire HD is one smartphone which will never see an upgrade to Android 4.0 Ice Cream Sandwich, at least officially, because HTC believes it would negatively affect the average user’s experience. 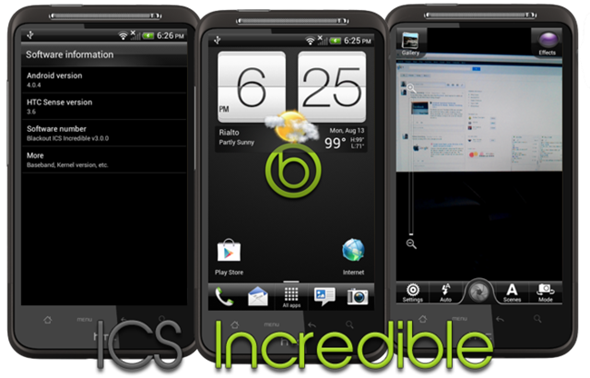 What about the advanced users? Well, HTC has nothing in store for you if you own a Desire HD; the vibrant Android developer community, though, has come up with an unofficial ROM based on Android 4.0.4 Ice Cream Sandwich with HTC Sense 3.6 on top. Yes, you heard that right, this the same experience you would’ve enjoyed had HTC decided to release 4.0 Ice Cream Sandwich officially.

Called Blackout ICS Incredible, the ROM is based build 4.10.405.1 of the HTC Incredible S firmware which itself is based on Android 4.0.4 Ice Cream Sandwich with version 3.6 of HTC’s custom Sense user experience added on top.

According to the official thread on XDA-Developers, they’ve so far found nothing on the ROM that doesn’t work. Yes, it’s a full-fledged ROM with everything working. How cool is that?

But that’s the good news.

The bad news is that you will need to fully wipe your personal data before installing the ROM. So, be sure to boot into ClockworkMod Recovery and take a nandroid backup in addition to manually saving your photos, videos, music, any downloaded files etc. etc.. As always with procedures involving replacing or tweaking (at low level) the stock ROM, you will, of course, need root access.

The ROM also supports the HTC Inspire which is currently stuck on Android 2.3.5 Gingerbread.

With Android 4.0 Ice Cream Sandwich already working on the Desire HD, we strongly expect a Android 4.1 Jelly Bean ROM with HTC Sense 4.0 to come out for the device in the near future.

For download links, warnings and basic instructions, as well as for posting queries, suggestions and complaints, please visit the official thread over on XDA-Developers.