Quite a bit of attention has been paid to the Windows Phone platform over the last few days. First, we had Samsung using their time at the IFA trade show in Berlin to introduce us to the Windows Phone 8 powered ATIV S smartphone, which both Samsung and Microsoft will be hoping to be a commercial success. Additionally, we have also seen a joint collaboration between Nokia and Microsoft, in which we witnessed the unveiling of the Lumia 820 and 920 devices that will feature Windows Phone 8 and bring a number of notable benefits to users.

That Windows Phone attention is continuing onto another day, with PayPal being the next in line to bring some good news to users of the growing platform. Although other mobile operating systems have been enjoying the use of the official native PayPal mobile services for quite some time, they have only just released the official Windows Phone version of the app. It’s quite possible that some territories may not be able to access the app through the Marketplace at the present time, but exercise a bit of patience as it is coming and already showing up in a number of stores. 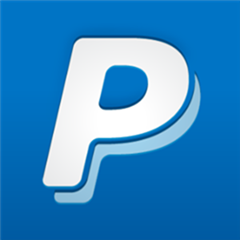 The app is published under the familiar eBay Inc. brand, which should be more than sufficient to confirm its authenticity to users, and offers all of the features that users would come to expect from a financial mobile app of this type. Downloaders will have the ability to manage their PayPal account on the go, dealing with most aspects of the service, including the ability to send and request money. Sending money from the mobile account is free when funding it from a bank or balance source and brings some very handy efficiency based benefits to users. 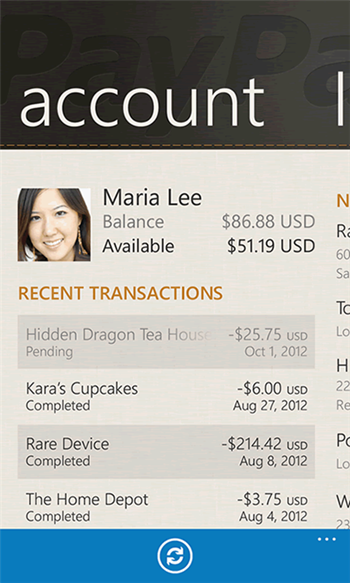 In addition to those two features, users can expect to be able to manage their accounts, with the ability to check and withdraw balances to a nominated bank account, as well as viewing historical entries into the account, perfect for checking when payments were made or received. One of the great little additions to the PayPal app is the locality feature that brings up a list of merchants in the local area of the device that subscribe to the PayPal Here service and accept PayPal as payment. 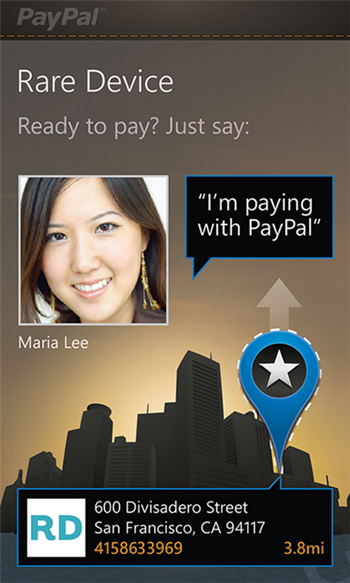 With a pretty decent and familiar user-interface that has been tweaked to fit the aesthetic flow of a Windows Phone device, the PayPal mobile app for Windows Phone is a must-have tool for any user.