When it comes to a product launch, few companies manage to draw in the swarms of consumers quite like Apple does. Every time a new iDevice hits the scene, thousands of fans queue for long hours and in all weathers to be among the first to get their hands on it, and last month’s launch of the iPhone 5 was no exception.

Even though the form factor of the iPhone 4 / 4S was more than competent, Apple has really thinned-out and lightened its flagship smartphone. Inclusive of a longer screen for the first time in its existence, the iPhone 5 is a real powerhouse, and it’s of little surprise the device has already sold in the tens of millions.

It wasn’t just iPhone fans making the pilgrimage towards their local Apple Retail Store – scores of journalists and news sources were also present to soak up the atmosphere, and it appears the Cupertino company made its own little documentary of the day’s events.

In a two-minute clip entitled “The Launch Day video,” keen queuers are seen congregated with fixed smiles, using their various other Apple products as they await their very own iPhone 5 unit. The video is now up on Apple’s official iPhone 5 page on its website, but like most web clips, it’s promptly found its way to YouTube:

It’s not an iPhone 5 ad as such, more a sharing of experiences from Apple’s own point of view. With that said, it’s a little refreshing to see an Apple advertisement in which the usual flurry of boastful, over-the-top superlatives are used to describe often distinctly average features.

Many see the waiting for an Apple product to be something of an institution, and although the iPad mini isn’t perhaps as exciting a release as the iPhone 5, don’t be surprised to see the usual suspects attempt to to make the trip – stormy weather or not. Meanwhile, the fruit company’s smartphone will continue to be added to more stores worldwide as of November 2nd, taking the current thirty-some number of countries officially retailing the device up to a hundred by the end of this year. 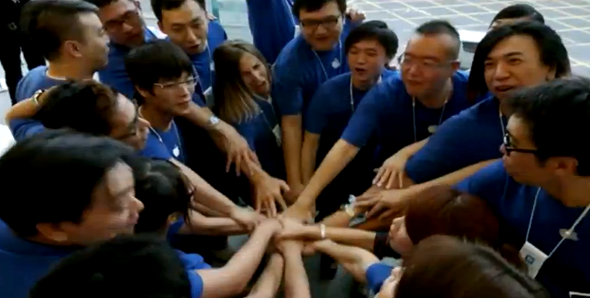 I’ve never queued for a new Apple product, but having used the iPhone 5 for a number of weeks, I’m sure those who did queue were not left disappointed.