Nexus One Availability on Verizon in US and Vodafone in UK

After weeks of rumors, gossips, leaks and revelations, the much hyped Nexus One (aka the Google Phone) has finally been unveiled today in a press event ceremony held at the Google Headquarters in Mountain View, California. Powered by Android 2.1 operating system, the Google Nexus One features 3.7’’ AMOLED screen, 1Ghz Snapdragon processor with 512mb of Ram and 5 megapixels autofocus camera with flash. The phone has been designed by Google and is manufactured through their partner HTC. 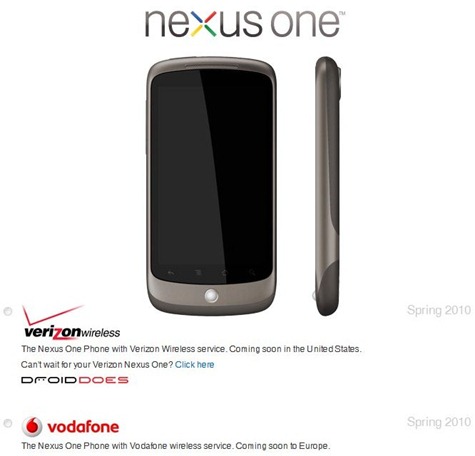 While most of the info that Google revealed today was already known through earlier leaked reports, one announcement that came off as a surprise was the Spring 2010 availability of Nexus One on Verizon Wireless in US, and Vodafone in UK. US customers of course can order Nexus One starting from today for US $529.99 for the unlocked version, and US $179 for the subsidized version on T Mobile with a two-year contract. The unlocked version of Nexus One is also available in UK, Singapore and Hong Kong. You can order it online today through google.com/phone.

The complete coverage on the Google Nexus One phone can be found here.