Next Call Of Duty Title And Release Date Apparently Confirmed

Activision’s massive Call of Duty Franchise is set to get a new addition during the latter part of 2012, with the latest leak almost serving as undeniable proof of just what is around the corner for the biggest series of gamers currently shipping.

Gamers may now have another clue as to what the next Call of Duty game will be, along with its release date after another leak appeared online.

When we say ‘may,’ what we actually mean is ‘almost definitely,’because this latest leak appears to be almost irrefutable, especially when tied in with previous leaks of a similar nature.

The most recent leak, a photo of two pre-order cards that have shown up at Target, confirm that the next Call of Duty game will indeed be Call of Duty: Black Ops 2 as had previously been rumored. Moreover, the cards also go on to confirm the release date of the aforementioned shooter, with 11/13/12 being the date printed on the face. 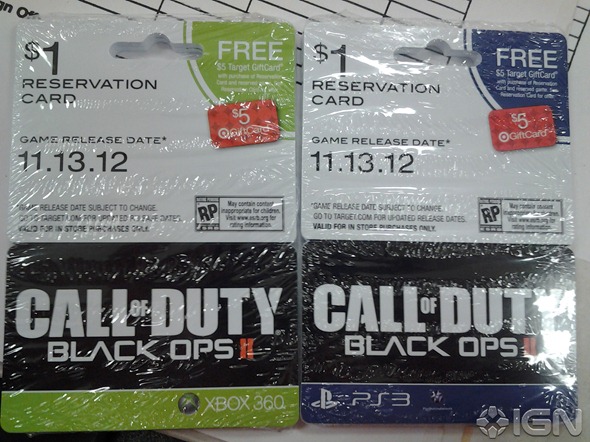 Call of Duty: Black Ops 2 was first rumored to be the next game in the hugely popular franchise after a teaser trailer was released by the series’ official web site. The teaser simply said that a new Call of Duty reveal would take place during the NBA Playoffs on May 1st.
More leaked material had also suggested that May 2nd was the date that we would receive more information, and Activision had already confirmed that a new Call of Duty game was on the cards for some time during 2012. It now appears that the game in question is indeed Call of Duty: Black Ops 2.

Call of Duty games are almost guaranteed blockbusters at this point, with sales eclipsing just about anything on the planet. Fans the world over will undoubtedly be happy to queue outside their local games emporium in order to get their hands on the latest installment as soon as possible, with special editions, along with exclusive content and hardware, also set to be good sellers for Activision.

Many had wondered just how many more games Activision could get out of Call of Duty without changing something major, but with a second installment of the Black Ops series following the successful first, the game maker is apparently happy to stick to a tried and tested formula, at least for now.