The smartphone has replaced many gadgets. The music player, the electronic organizer, the flashlight, the alarm clock and, arguably, the portable console and the point and shoot camera.

Smartphones very easily replace the alarm clock. Alarm clock apps on the App Store / Google Play are a dime-a-dozen these days. They offer plenty of advantages over their forefathers such as being able to choose your own wake-up tunes, decide which RSS feeds or podcasts get read out to you by a robotic voice and added features like dynamic snooze duration and being made to solve arithmetic problems to wake up your brain.

These features are very nice and all, but they don’t significantly change the way you wake up in the morning. Typing in CAPTCHA-like strings while you’re half-sleep half-awake? Snooze duration decreasing after each instance? Meh. 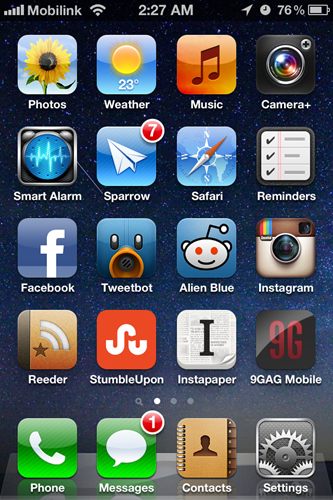 Developed by Viaden Mobile, Smart Alarm is an advanced alarm clock app for iOS devices that monitors your sleep cycles and, based on that, wakes you up at the perfect time.

The Science of Sleep Cycles

What are sleep cycles, you ask? Well, the concept behind sleep cycles is thus: sleep is divided into two basic stages light and deep. You alternate between the two during the night. A healthy night’s sleep consists of 4-5 sleep cycles.

But that’s not enough, when you wake up is equally important.

Deep sleep is the most beneficial to you: it’s when you dream, it’s when your internal battery gets charged the best… but being woken up during this will make you feel groggy, agitated, irritated and just not ready to face the world. Light sleep has the opposite characteristics and so waking up during this is best for you.

That’s precisely what Smart Alarm does. When you’re in light sleep stage, you tend to move a lot; Smart Alarm detects that using your device’s accelerometer and wakes you up! 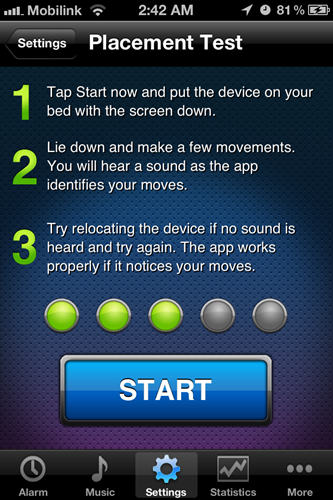 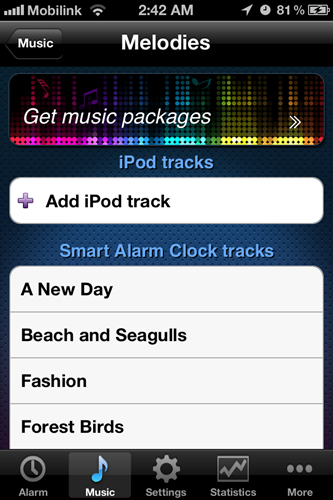 Before you set an alarm, you are asked to run a placement test from Settings to ensure that it picks up movement at night. From Music, you can pick and choose from a handful of lovely built-in tracks to sleep/wakeup to. If you don’t like any of the pre-included tracks, you can always choose your own tracks (paid version only). I’m a big fan of A New Day and Tender Trio. 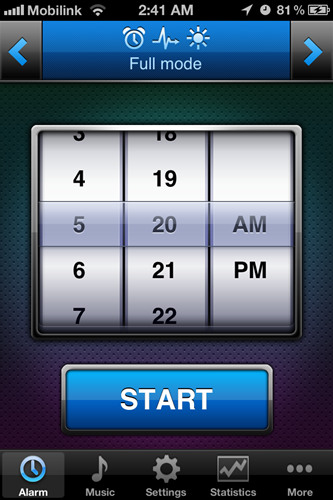 Finally, you can set your alarm from the Alarm tab. Here you can choose between four modes: a basic sleep cycles set alarm mode that wakes you up at the set time, sleep cycles alarm mode, a sleep quality control mode that monitors movements and disturbances and finally the full mode which lets monitors sleep stages, disturbing noises and wakes you up around the time you set.

I’ve been using Smart Alarm for the past week on my iPhone 4S on iOS 5.1 and can confirm that it works as advertised. I ran the app through a variety of scenarios such as sleeping for just 3 hours at night to sleeping a full 10 hours and everything in between. It woke me up at the right stage about 4 out of 5 times. When I woke up, I was refreshed, happy and motivated enough to prepare for an exam in 4 hours. Whether I completed my preparation and did well in the exam or not is a separate discussion. 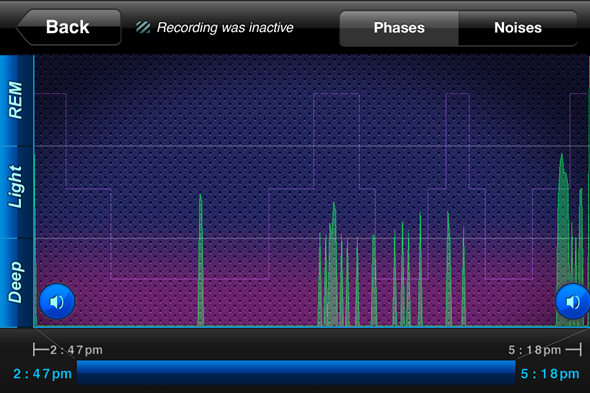 The neat Statistics tab shows you the different stages of Sleep

I highly recommend Smart Alarm to everyone who owns an iOS device and has trouble waking up in the morning. There is a free version [App Store] available that comes with limited set of Alarm modes and music selection (which can be unlocked using in-app purchases) and paid version [App Store] that comes with no limitations at all. Extra features such as binaural beats, relaxation sounds can be bought with – you guessed it! – in-app purchases.