New Screenshot Of Galaxy S5 TouchWiz Interface Leaked, Here’s What It Looks Like

We now have additional evidence to suggest that Samsung’s recent decision to overhaul the user-interface in its PRO Galaxy Note and Galaxy Tab tablets could soon be followed up with a new look throughout. The fresh and modern magazine based design that graced the aforementioned devices definitely managed to capture the imagination of users, which can only be seen as a positive as it seems that upcoming Samsung smartphones will also benefit from a fresh lick of interface paint, as the latest leaked images show.

Our first glance at Samsung’s new visual direction yielded a whole set of new and improved icons, as well as a scrolling set of slides that not only ensure that important content is front and center, but also seem to derive more than a little inspiration from the tiles found on Windows Phone devices. Still, it’s hard to argue that the overhauled visuals aren’t a dramatic improvement on the old tired user-interface. As a follow up to the original leak, a new set of images have appeared that show a similar cards type setup as the previous reveal, but this time managing to pack in a lot more information.

As mobile hardware develops and becomes more important in our day-to-day lives we tend to want more relevant and on-point information to be readily available at all times. The leaked screenshots show that Samsung’s new tiled homepage could provide rapid, contextualized information with minimal fuss, similar to how the Google Now service aims to provide "the right information at the right time". The type of information that could be displayed is practically endless, but the screenshots themselves illustrate the presentation of location data, the status of a flight as well as all relevant information from a recently tracked run. 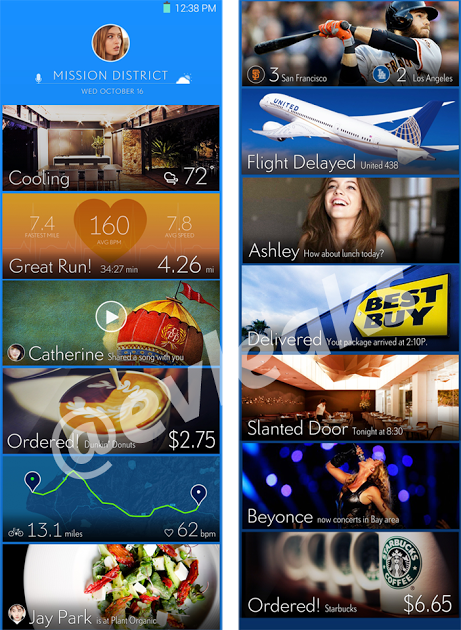 If this new visual style is going to be Samsung’s preferred direction for the future then the likelihood is that it will make its first appearance on the Samsung Galaxy S5 when it lands this year. The revamped and dramatically more elegant TouchWiz needs a premium hardware like the S5 to get users onboard early on. With that in mind, there’s still actually no guarantees that the South Korean company will stay true to these leaks meaning that the end product could be something entirely different.