SanDisk has revealed the first USB thumb drive to take advantage of the new USB Type-C standard while also keeping the legacy USB option around at the same time.

With this year’s Mobile World Congress now in full swing over in Barcelona, all the big movers and shakers of the mobile industry are getting their announcements out and their new toys into the hands of journalists. SanDisk is no different.

Announced during the MWC event, SanDisk’s new thumb drive may not immediately get your attention until you give it a proper glance. Then, and only then, you’ll notice its trump card – a USB Type-C connector.

The first of its kind, the new drive features s new Type-C connector on one side and a standard, more bulky USB connector on the other.

Right now there isn’t much you can do with that new Type-C jack, but with Apple heavily rumored to be using the port on an upcoming 12-inch MacBook Air it appears SanDisk is hedging its bets. Mobile devices are also set to use USB Type-C in the future, so even if Apple doesn’t adopt the new standard straight away then someone will surely make use of it. The same USB connector at the other end should ensure compatibility regardless, however. A companion Android app is already available and we would expect support to be built into notebooks as time rolls on. 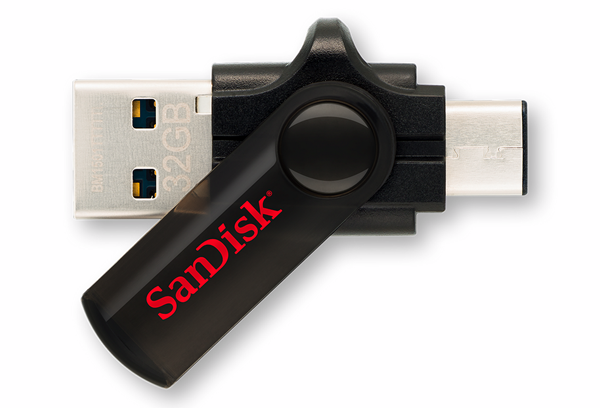 Set to become available some time in Q2 there isn’t yet s price for the new, forward thinking thumb drive. Eventually we would expect all thumb drives to sport the new, smaller USB Type-C connector but until then SanDisk is in a league of its own.