Samsung is up to their old tricks again and have released a new ad on the Samsung Mobile USA YouTube channel, which, once again attempts to poke fun at those Apple hardware fans who religiously queue up outside of official retail stores to get their hands on the latest iPhone. With the iPhone 5 due for an official public release this coming Friday, Samsung’s marketing departments have taken the opportunity to have a pop shot at those loyal Apple fans who value the company and their product so much.

This isn’t the first time Samsung has used video or print media to poke fun at those consumers who are willing to spend their valuable time in line waiting for an Apple product. You may remember that the Korean company attempted to promote their Galaxy S II device back in November of last year by producing a similar video that made light of Apple’s customers who wait in line. This latest video is remarkably similar to their previous effort, but this time focuses on the company’s latest flagship device, the Galaxy S III. 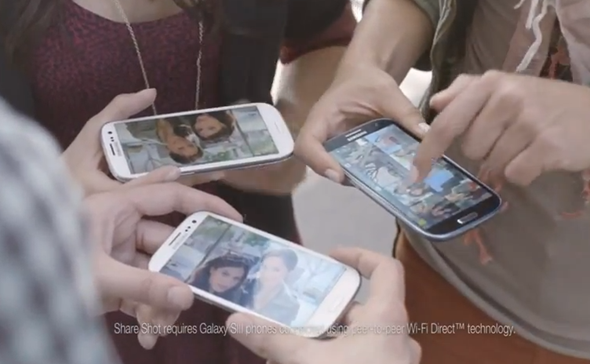 The video, entitled "The Next Big Thing is Here Already – The Galaxy S III", follows hot on the heels of their print ad campaign that stacked the iPhone 5 up against the Galaxy S III and took a shot at Apple by featuring the tagline "It doesn’t take a genius". We need to take these ads for what they are and laugh them off, but Samsung obviously isn’t too happy that the iPhone 5 has smashed early sales records, forcing Apple’s stock to rise above the $700 mark for the first time.

If you actually decide to fritter away ninety seconds of your life by watching the new video, then you’ll see Galaxy S III owners taking advantage of the the built-in Near Field Communication (NFC) and LTE technologies in the device. It also features one particularly excited Apple customer claiming that the company should offer some kind of special promotion for those patrons who have queued five times in a row to get their hands on the latest Apple hardware.

There’s no denying that the Galaxy S III is one of the most powerful and capable devices on the market, but with the iPhone 5 shifting two million units in three days and the Galaxy S III selling twenty million in three months, the next big thing is indeed here and it’ll be extremely interesting to see which device takes the title.