We’ve seen quite a few iOS 7 concepts during the past couple of months, and given that the general consensus seems to be one of Apple’s mobile being real need of some rejuvenation, this should perhaps come as no surprise. We have been steadfast in its tracking of these concepts, and today, we have come across a modest, but perhaps realistic concept design based on what Apple will have been able to achieve by the time WWDC 2013 comes around.

As the vast majority of you will likely be aware, Apple’s Worldwide Developers Conference will commence from June 10th this year, and although we’re expecting the wraps to be taken off OS X 10.9, by far the most pressing issue is that of iOS 7. Scott Forstall, former iOS SVP and so-called "spiritual partner" of Steve Jobs, is no longer a part of the company, and with Sir Jony Ive now lending his creative wisdom to the software side of things, the tech world hopes for some more encouraging enhancements moving forward.

Since the German site Apfelpage.de has sought to be realistic in this particular concept, it packs in less of the speculative features we’ve become accustomed to in some of the other iOS 7 ideas. Bringing toggles to the lock screen – something covered for a long while within the jailbreak scene – the concept then goes on to detail several interesting alterations and enhancements. 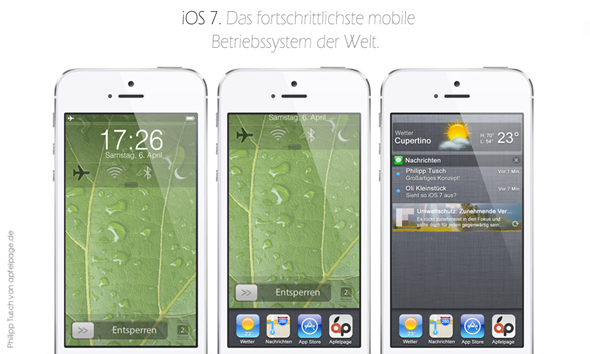 Both the Notification Center and multitasking bar are integrated into the lock screen as well as the home screen, and are accessible by lifting the area where the camera slider currently resides. Nothing appears to have been done about the multitask bar per se, and given just how one-dimensional and fiddly the feature currently is, this is a little disappointing. Personally, I hope Apple concentrates heavily on bringing much more enhanced functionality to multitasking than is currently on offer. 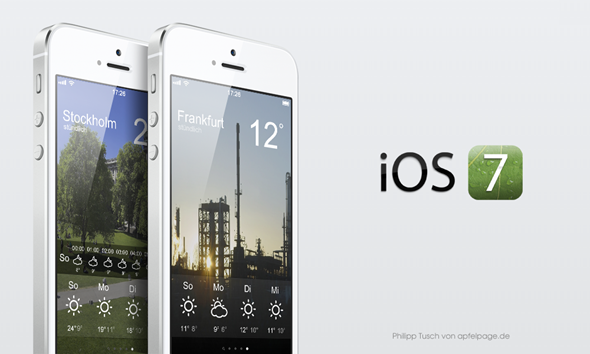 The concept then goes on to throw in one or two other goodies, including a revamped, Mailbox-like Mail app, and overall, this effort is perhaps indicative of some of the changes we could actually see on June 10th. Hopefully, as well as ridding the OS of all traces of skeuomorphism, Ive’s influence will help vastly improve iOS 7’s functionality, and I, for one, cannot wait to see what Apple comes up with.

Check out the concept below, and let us know what you think by sharing your thoughts in the comments section.

(Source: Apfelpage.de [Google Translate]) Thanks, Marco for the hat tip!