The main reason why the iPhone 6 has garnered so much more attention than any other Apple smartphone is because, according to reports, the device is set for a dramatic redesign that will also see the display size increase. But while we have, in part, been led to believe that Apple may simply “add” pixels onto the displays of the 4.7- and 5.5-inch variants of the upcoming handset – retaining the same pixel density – it has now come to light that the Cupertino-based outfit may offer both devices a resolution that improves the pixels-per-inch count over the current iPhone 5s.

The only previous display increase to the iPhone line occurred with 2012’s iPhone 5, which saw the company lengthen the display whilst retaining the width of the iPhone 4s. 960 x 640 became 1136 x 640, so whilst the screen did offer more real estate, it remained at 326 ppi.

Bearing in mind that Apple classes anything over 300 ppi as ‘Retina,’ it has been reckoned by some that the Mac maker may follow a similar procedure with the iPhone 6’s two variants – adding pixels where necessary whilst keeping the Retina display at 326 ppi. But now, a new report at 9to5Mac suggests that the resolution will be increased to 1704 x 960, which is quite a significant bump from what the current iPhone 5s manages.

We cannot be certain of the precise measurements for the iPhone 6 as yet, much less their displays, but the common theme is that we’ll be seeing a 4.7-inch option and a further, 5.5-inch edition. 1704 x 960 over 4.7 inches would equate to a pixel density of 416 ppi, which is not only a tremendous increase over the iPhone 5s’s 326 ppi, but also well in excess of what Apple deems to be Retina. 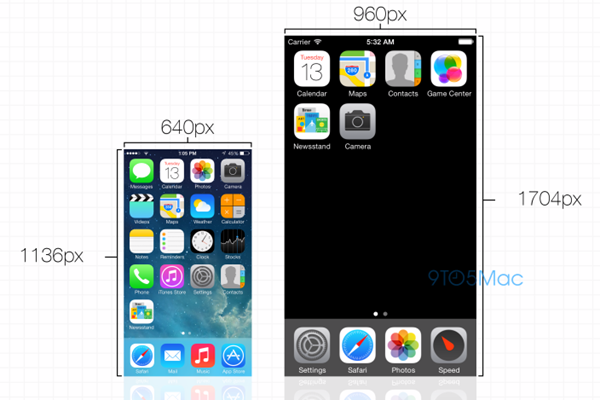 By the same token, a 5.5-inch panel’s pixel density would measure in at 356ppi, which, whilst not as sharp as the smaller option, would still present an improvement on the current line-up, and given Apple’s assessment of what the human Retina can see anyway, shouldn’t actually matter.

Considering also that, since the 5.5-inch iPhone 6’s display is larger, it will likely be held further from the face, and you’re left with two handsets that should be more than able to hold their own in terms of display sharpness.

What do you make of all this – should Apple be looking to go sharper? Or is anything over 300 ppi simply overkill / vanity? Share your comments below!