If the excitement over the soon-to-be released Xbox One and PlayStation 4 hasn’t quite managed to ramp your adrenaline levels, then thankfully EA is on hand to try and raise the stakes a little more. As part of the ongoing push to publicize the latest iteration of the Need for Speed franchise, EA has released an extended version of the Rivals trailer that was shown off during the E3 Conference, with a lot more emphasis placed on the Cops Vs. Racers aspect of the next-generation video game.

The latest Rivals trailer to be released by EA and Ghost Games may be 1:45 seconds long, but the first 40 seconds of that is spent setting the scene with some close up shots of environments, car bodywork and topographical views of in-game terrain. The whole of the extended trailer features the same cinematic production that we have come to expect from big name video game advertisements, with audible narration spanning the full clip, with the intention of giving the player a glimpse into the mindset of the cop and the racer.

In similar fashion to the previous Need for Speed release, the Rivals edition of the game will be set in an entirely open environment that allows players to make the most of the available high-powered vehicles that are littered throughout the game. In addition to the vast open-world aspect, gamers will also be expected to complete a series of difficult challenges as well as adding collectible items to their inventory, all while maintaining a healthy rivalry with the law. 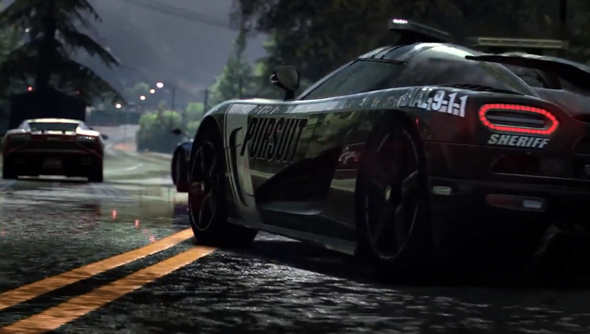 One of the most interesting aspects of the Need for Speed Rivals production is that Ghost Games – a newly formed subsidiary of EA – have decided to allow players the choice of which side of the law they sit on when stepping behind the wheel of a glorious performance car. Gamers who have no issue in casting aside their moral obligations can become a “racer” and openly taunt the establishment. Alternatively, those who prefer to conduct themselves impeccably can step into the shoes of a “cop” and do their utmost to solve the racing issue.

Regardless of the chosen allegiances, Need for Speed Rivals will be available for current generation platforms (Xbox 360, PS3 and PC) on November 19th with a next-generation release being slated for sometime this year.