My biggest beef with Windows Phone is the lack of quality apps, and it’s no hidden truth that in comparison to iOS (or even Android), the quality and quantity both for Windows Phone apps is hardly stellar. With that kind of prevailing scenario, it’s always refreshing to see a recognized developer brining a highly-polished and feature rich app to the masses on the said platform, and that’s exactly what Microsoft’s Fresh Paint feels like. It’s a newly released app exclusive to Windows Phone 8 that allows you to create beautiful artwork right there and then on your Windows Phone 8 smartphone.

The app is basically a canvas replica for WP8 devices that allows you to not only create artwork from scratch, but also retouch and reimagine your camera photos. For the latter, you may snap a fresh capture right from within the app itself, and then use it to your leisure. The features are significant for casual painting and retouching of images on the go, while the officially cited feature-pack includes:

Fresh Paint itself is quite pleasing as far as the interface and layout goes, adhering to the general Modern interface of Windows Phone 8. For users of the app from Windows 8 itself, there are quite a few reminiscent features, and the mobile version of the desktop/tablet app carries forth a lot from its elder sibling. The SkyDrive integration is an additional plus, meaning that you can start working on an image from your Windows 8-based desktop PC and resume any time on your smartphone. 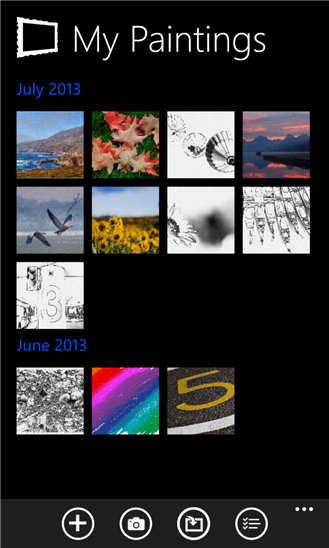 Seeing as how Microsoft seems to be bringing its arsenal of quality apps to WP8 makes us believe that the Redmond company is fairly serious towards the growth of the ecosystem. As I said earlier, where quality apps are hard to come by, such additions are very positively received, and while Fresh Paint may be no productivity champion, it shows that the direction where Windows Phone is headed, is the correct one.

Fresh Paint is a Windows Phone 8 exclusive app (sorry WP 7.x users!), and requires a device with at least 1GB of RAM. It comes as a 22MB download, and is available for free over at the Windows Phone Store.