Barcelona: My Phone, to sync text messages, photos, video, contacts and more to the Web:

The free My Phone service will enable people to access, manage and back up their personal information on their device to a password-protected Web-based service, making it easier to upgrade phones without the worry of losing important information. With automatic syncing and backup, users can count on their contacts, appointments, text messages and other information being kept up to date and easily restored should they lose or upgrade their phone. Consumers also will be able to automatically upload photos and video from their Windows® phone directly to the My Phone service, making it simple to preserve content that, in the past, would have lived and died on the phone. The My Phone service is currently available in a limited invitation-only beta. 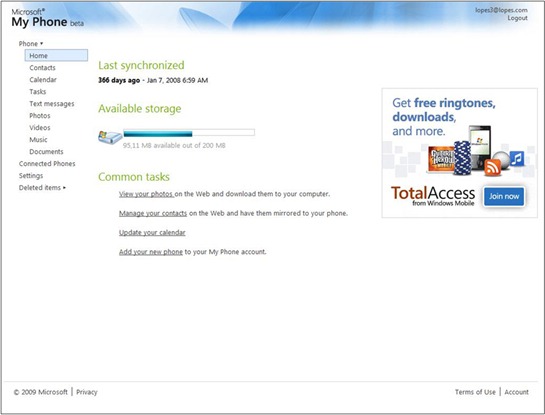 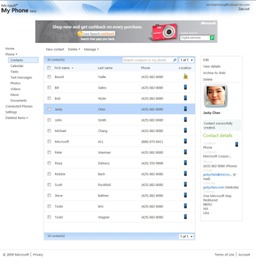 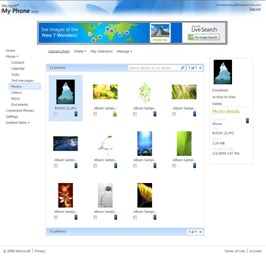 and Windows Marketplace for Mobile, a new marketplace that will provide direct-to-phone mobile applications and can be accessed from both the phone and the Web to make it easier to access applications designed for Windows phones:

The new operating system features Windows® Marketplace for Mobile, a rich and integrated marketplace for searching, browsing and purchas ing mobile applications from Windows® phones or from a PC by simply using a Windows Live ID. The new marketplace will be included with all Windows phones based on Windows Mobile 6.5, which will help consumers to easily find, install and experience those applications that fit their needs and make the phone truly personal. Developers, who have already built over 20,000 applications for Windows® phones, will be able to offer applications to customers through the marketplace via a simple security and compatibility check from Microsoft.

The announcement of both of these two services were excepted. But there is still no Zune show for Windows phones. Rumors were floating around the web about the possible Zune + Windows Mobile merger but Microsoft made no such announcement during the Ballmer’s keynote session at the Mobile World Conference in Barcelona.

You can follow me on twitter to keep yourself updated about what’s happening in and around the Mobile World Conference 2009 in Barcelona.