A Chinese site by the name of Mobile Android seems to have found first pictures and specs sheet of the upcoming sequel to the popular Droid phone, dubbed as Motorola Sholes Tablet. The leaked specs sheet looks impressive with 3.7’’ 840×485 WVGA capacitive multi-touch screen, 8 megapixel camera and HDMI output like the one in Zune HD. This combination of HDMI port + 8 megapixel camera will enable Sholes (Droid 2.0) to record high definition video, and then output it in HD 720p resolution. 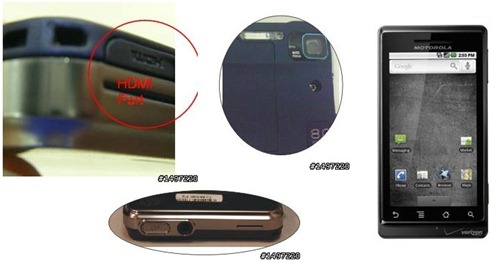 Sholes Tablet will be powered by Android 2.0 and will not include physical keyboard like its predecessor Motorola Droid on Verizon. We can expect official word on Sholes Tablet from Motorola soon.

Sholes Tablet will probably go on sale in second half of 2010. With Sony Ericsson’s Xperia X10 also set to release in the same year as Sholes Tablet and with 8 megapixels camera, things are surely looking good for the Android camp. [via BGR]

You may also like to check out the comparison between Motorola Droid and Xperia X10.