When Google bought Motorola Mobility, it was an obvious attempt to not only revive the company’s business, but for Google to enter the hardware manufacturing business itself. Ironically, since then, none of the Nexus devices have been Motorola branded, but that nowhere means that the company’s smartphone making spirit has dampened. If anything, we now have confirmation that not only is Moto G, the low-end sibling to the mighty and powerful Moto X, is very real, but it’s very soon to be announced, as a new sign-up page put by the company clearly shows that the new device is being announced on November 13, 2013.

Up until this point, all we had on the Moto G was that it “might” be a trimmed down version of the Moto X. While the sign-up page doesn’t reveal much, except for a an animated globe in the center flanked by “moto g” on the left and November 13 on the right, the subsequent email that you get after signing up does verify that the rumored device is not only true, but it will officially be revealed to the world on Nov. 13. Seems like we have a mere 9 days to go!

The world caught the first glimpses of Moto G when an apparent malfunction with Motorola’s website displayed a new menu “Moto G” with a dead following link. While the mysterious and evasive menu disappeared shortly, it wasn’t before it caught attention of the Internet population, and since then, rumors have been abound pertaining to the device. Later leaks suggested that Moto G can be a trimmed down version of the company’s reigning flagship, the Moto X, which aims to compete with other high-end smartphones like the HTC One, Samsung Galaxy S4 and iPhone 5s. Some leaks also put the new rumored (now confirmed) device at a launch price of under $200, which, if true, would make it a very amazing bargain. 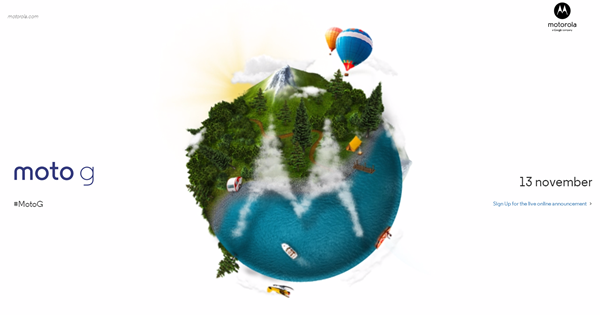 It’s interesting to note that Moto X, despite being a top of the line device, got overshadowed by the launch of Samsung Galaxy Note 3 and then iPhone 5s, which pretty much stole the show when it came to capturing media limelight. With a pre-announcement sign-up page, the company might be trying to generate exactly the kind on hype that it would’ve hoped for, and with no other major launches in sight at the moment, it actually might succeed in doing that.

Point your browser to moto-g.com to sign-up and be the first to know what the whole fuss is about.