Microsoft may be all friendly with Apple when it suits, but that doesn’t mean that the gloves don’t come off when a different tact is needed. With Microsoft trying to get the world interested in its tablet-like Surface Book computer, a new TV ad has been released that not only touts Microsoft’s own hardware but manages to have a dig at Apple as well.

The Surface Book is essentially a Microsoft Surface but in notebook form, and while it’s a very interesting piece of kit, someone at Microsoft has obviously decided that the best way to get the attention of the paying public is to not simply tell everyone how great the Surface Book is, but to also take a swipe at Apple and its Mac in the process. 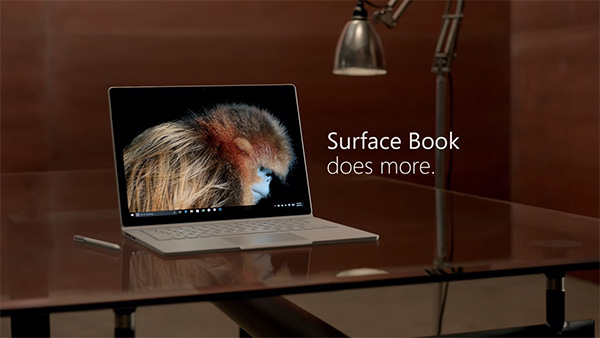 The new ad features Animal photographer Tim Flach whom it seems Microsoft gave the line of “I can’t do that on my Mac” in an attempt to show that its Surface Book’s tablet roots give it an advantage over Apple’s more traditional notebook design. The things in question – retouching photos, etc. – are better suited to the iPad Pro and Apple Pencil anyway. but we’ll not get into that right now.

Microsoft isn’t the first to go on the offensive with an advertising campaign. Apple’s own “I’m a Mac” adverts were both hugely popular and perhaps unnecessarily unfair to Microsoft at the same time, but there’s little doubt that they gave the Mac a leg up at a time where it most certainly needed it. Microsoft’s attempts to follow suit may be enough to give the Surface Book the shot in the arm that it needs, but we doubt too many people at Apple will be losing sleep over it.

Microsoft recently started a similar tv campaign for Windows 10 with the same “Windows 10 PCs do more” tagline, highlighting what the Windows OS can do that a Mac can’t.