The 2.0 iteration of Microsoft’s Surface technology, which looks a lot like a table-cum-tablet, is now available to preorder via Samsung’s website.

The product first debuted in 2007, and rather than being a product for the mass market, it was aimed at businesses for exhibitions, meetings and conferences. You can – if you feel the necessity to – purchase one yourself, but it will set you back a whopping $8,400. They have found a comfortable home in many casinos across the world, which, ironically, is where you’ll probably need to go in order to afford one 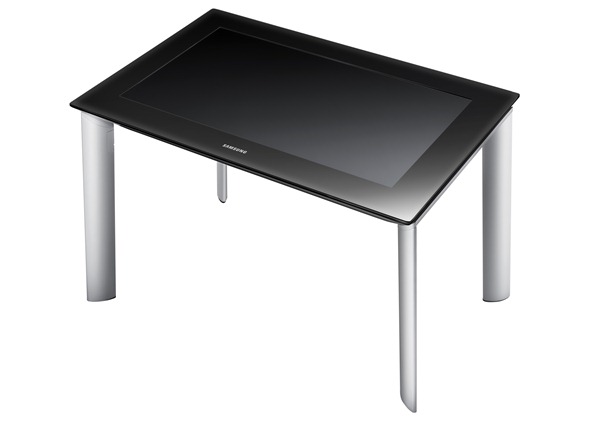 The Surface 2, or Samsung SUR40 for purpose of officially, brings a host of tidy upgrades from its predecessor. The clinching feature is the PixelSense technology, which according to Microsoft, allows LCD panels to ‘see’ without the use of cameras. At 40 inches wide and with a weight of around 87 pounds, those who thought Samsung’s Galaxy Note was on the large side, well, the Korean company just outdid itself – massively

For the tech-spec fanatics, the Windows 7-based unit has a 1080p display which boasts 2000:1 contrast ratio with an 8-millisecond response time. Additionally, it runs a 2.9-GHz Athlon X2 Dual-Core 245e processor, an AMD HD6750M graphics chip, and has 4GB of RAM, as well as four USB 2.0 ports and a HDMI port.

The ‘wow’ factor lies in PixelSense, though, and as Redmond-based Microsoft revealed earlier this year, “Every pixel is acting as a camera, so the surface of the PC can actually see.” The panel can recognize 50-points of simultaneous interaction, which takes multi-touch gesturing to a whole new level. Put simply, if five people created gestures at the same time using each finger and thumb, the Surface would be able to recognize and act on each.

For developers keen to create apps for the Samsung SUR 40, a developers’ kit available is available over at the Surface Developers Center.

It looks like an interesting product, and could – with price cuts – wind up being a fancy coffee table for those with a little disposable cash and a taste for futuristic technology.

If it was $2000, would you buy one? Please leave your thoughts, naturally, on our Facebook and Google+ pages.