One of the best ways to show consumers how much better your product is than a rival’s is to compare your great invention with that of your adversary. Apple is one of the longest-standing nemeses of Microsoft, and in an attempt to showcase the Surface Pro 3’s credentials, has used the MacBook Air as fodder.

Announced back in May, the Surface Pro 3 is slick, sizeable, and most of all, powerful. Given the MacBook Air’s status as an iconic notebook that, despite the emergence of the tablet, still sells many millions of units per year, it makes sense for Microsoft to show just why one needn’t own Apple’s slickest Mac. 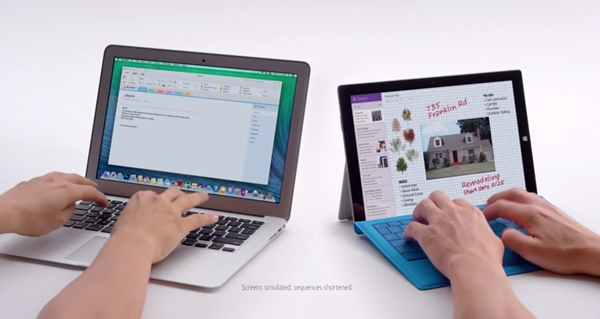 The first of the three ads, entitled “Crowded” demonstrates the Surface Pro 3’s credentials as a notebook and a tablet. Despite joining the era of the touch-screen decidedly late, the software maker has doggedly tried to sell the idea that tablets don’t need to replace laptops and vice-versa, but that consumers can enjoy both in a hybrid fashion.

The ad goes on to dispel any misconceptions that tablets, or, at least, the Surface Pro 3, is not as powerful as the likes of the MacBook Air, and that in actual fact, is fully equipped under the hood thanks to its Intel-made processor. With the in-built kickstand and numerous fold-over keyboard options, the Surface Pro 3 is just as much laptop as it is notebook, and in this case, more than a worthy replacement for the MacBook Air.

The next ad, called “Head to Head”, is a bit more forthright in its comparisons with the MacBook Air. With both including 128GB of on-board storage and a very satisfactory 4GB of RAM, there’s no apparent reason why a consumer shouldn’t opt for the Surface Pro 3, and with the added bonus of also being a touch-screen tablet for those occasions where typing isn’t of the essence, it has quite a significant trump card.

Finally, the “Power” video reminds viewers that the Surface Pro 3 is ready for any kind of computing, running Adobe Photoshop with aplomb while also including the necessary input ports that consumers expect from notebook devices like the MacBook Air.

Although the major names in tech like to bash each other at any opportunity, Microsoft keeps this one fairly clean and matter-of-fact, focusing on the truly advantageous points rather than waxing poetic with opinion-based judgments.

MacBook Air owners, would you consider making the leap to the all-new Surface Pro 3?