The Microsoft Surface Pro 3 is an exceptional hybrid PC with very powerful specs – something that can be easily compared to some of the latest ultrabooks out these days, and the Xbox maker badly wants to make this clear to everyone out there. In its latest bid, Microsoft has compared its potent spec’d device to Apple’s MacBook Air, but with a Christmas theme this time around as the holiday shopping season inches near.

This wouldn’t be the first time Microsoft has poked fun at the MacBook Air, but it is clear that with the Surface Pro 3 Microsoft feels it’s more than ready to compete or even outrun the MacBook Air. With the high-end model carrying the latest 4th-gen Intel Core i7, 8GB RAM and a 512GB SSD drive, sure it matches the best ultrabooks in the market. 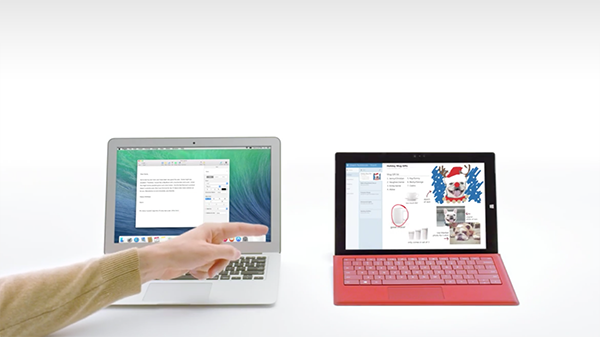 "I think I like your Surface Pro 3" goes the voice of the ‘delighted’ MacBook Air user, and sure he does, but the Surface Pro 3 as per various reviews across the Internet may paint it to be a potent Windows based hybrid, but as far as the keyboard (not bundled) is concerned, it just does not compare to the feel you find typing on a laptop.

Microsoft had gone straight to comparing the Surface Pro 3 to the MacBook Air citing how the ultrabook lacks any touch input, or for that matter weighs heavier than the Surface Pro 3 when it was announced back in May this year. The two devices were actually compared side-by-side live, on stage.

As a tablet that runs the entire Windows 8.1 OS as it would on any notebook, the Surface Pro 3 is a feature packed device, but with the news of Apple purportedly developing its own 12-inch iPad Pro due for release next year, the comparison game should take an interesting turn, one that might see Microsoft revert back to comparing the Surface Pro series to the iPad once again.

Which device do you prefer and why? Let us know what you think in the comments section below.