If there’s one thing that strikes everyone as attractive in Windows Phone, it’s the awesome Metro UI. It’s simple, clean and just very efficient in disseminating information. Metro UI has since then permeated just about every other major product from Microsoft, whether it is the Xbox 360, Office suite of productivity apps (look at Office 15!) or even its flagship Windows desktop operating system.

This is while Android and iOS continue to be based on a very traditional icon-based user interface. There are plenty of themes and add-ons out there that try bringing the Metro UI to these mobile platforms. We’ve covered them many of them before and have across an all new Windows 8 based Metro UI theme for the iPhone. Check it out after the jump. 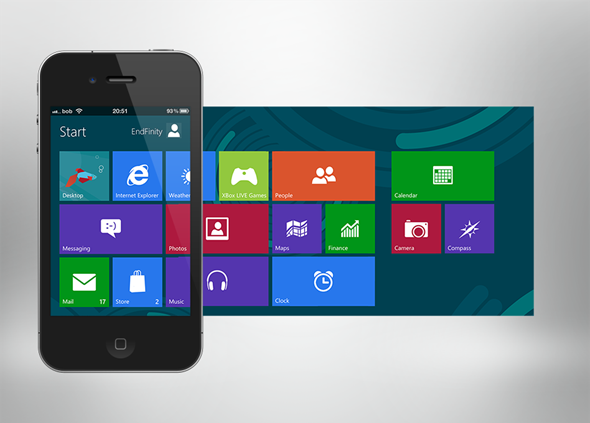 The theme is called Metroon and what it does is bring the (controversial*) Windows 8 Metro UI experience to the iPhone and iPod touch. The UI is appropriately adjusted for the iPhone’s smaller 3.5-inch display, so live tiles are packed really close together. There’s an app menu for accessing all your apps and you can even make use of a desktop button to head back into the traditional desktop, just like Windows 8.

You will of course have to jailbreak your iPhone / iPod touch to be able to use this tweak. Jailbreaking is a very simple process, all it takes is connecting your iOS device (iOS 5.1.1, preferably), downloading Absinthe jailbreaking tool and just clicking the Jailbreak button.

Metroon is based on DreamBoard which is an alternative to the established king of theming on iOS: WinterBoard. You will have to install DreamBoard before installing Metroon. Metroon is available from Cydia under ModMyi repo for $1.50, which we believe is a fair price for what it has to offer.

Be sure to let us know what you think of Metroon by leaving a comment over on our Facebook and Google+ page.

*Controversial because many people, including me, believe the new touch-oriented Start screen on Windows 8 isn’t a very good idea.